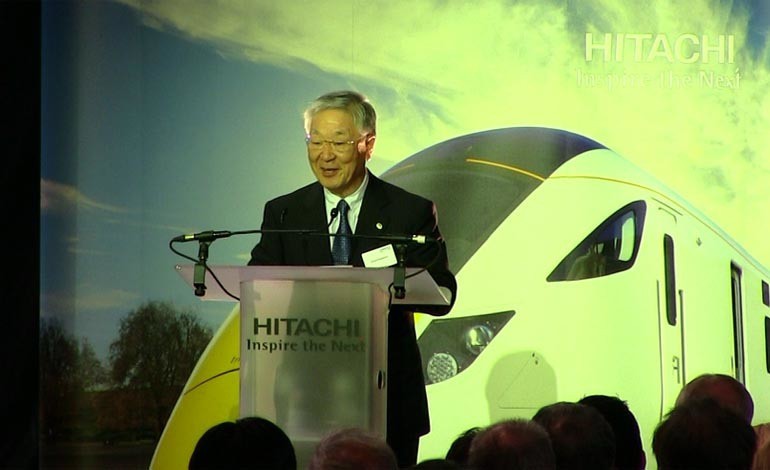 The chairman of Hitachi says the reality of Brexit would mean jobs being lost and investment being held back.

Hitachi chairman Hiroaki Nakanishi – pictured above during the opening ceremony – said the UK was attractive as the best base for accessing the European Union’s market of 500m consumers.

However, Mr Nakanishi now says Brexit represented a “boulder on the line” ahead of the EU vote on 23rd June.

He said: “In the ‘80s Nissan and Toyota came to the UK on the basis that if they produced here and employed a British workforce they would be treated as European companies.

“This was only possible because Britain was inside the EU; and so the UK car industry was revived and became an exporter again. From Japan, this incredible success story looks like a huge gain from the UK’s membership of the EU.

“We worry because those advocating Brexit have no answer to how the UK could negotiate cost-free access to this huge market from a position outside it.

“It would take a long time and result in uncertain market conditions; during this renegotiation period, investors would probably be waiting to see the outcomes, hold back on investment, and jobs would be lost. This is the cold economic reality of Brexit.”

Hitachi’s multi-million pound plant marks the largest inward investment in the North East since the opening of the Nissan plant in Sunderland.

The factory will employ more than 700 people when at full capacity, while many more jobs created in its supply chain.

This latest intervention from Hitachi, which also has its design headquarters in London, follows a statement issued in March in which it called for Britain to remain in the EU. Similar statements have also been released by other large North East firms including Nissan and Virgin Money.

The statement warned: “A potential departure from the EU creates uncertainty in terms of economics, trade, skills and talent – particularly in manufacturing, and would affect the stability that we need for continued investment and long-term growth.

“We believe that a strong and united Europe with the UK in a single, open market will be better for Europe’s prosperity, and therefore for Hitachi’s business.”

He said: “The words of the Hitachi chairman, Mr Nakanishi, should come as a warning to those promoting the Leave campaign. Hitachi has made the biggest private sector investment in the North East since Nissan.

“The train building factory is in my constituency because of the brilliant local workforce and because the UK is the gateway to Europe. It would be a tragedy if the UK votes to leave the EU and put all the investment at risk.

“The leave campaigners are not acting in the best interest of the North East economy. What they are promoting is economic madness. I, and others, worked long and hard to ensure Hitachi came to the North East. I want to see the company stay for the long-term and expand creating more jobs, skills and prosperity. That can only happen if we remain part of the EU.”

Andy Saunders, chairman of Business for Britain North East, said: “Hitachi’s claims are odd given that it was only in January that its chairman said the company would stay in the UK, regardless of the referendum outcome.

“Hitachi is a major customer of this Government and spends as much as €1.25m a year lobbying the European Commission – that tells you all you need to know about this statement.

“Voters are sick of employers peddling scare stories and they want to know about the positive case for leaving the EU.”