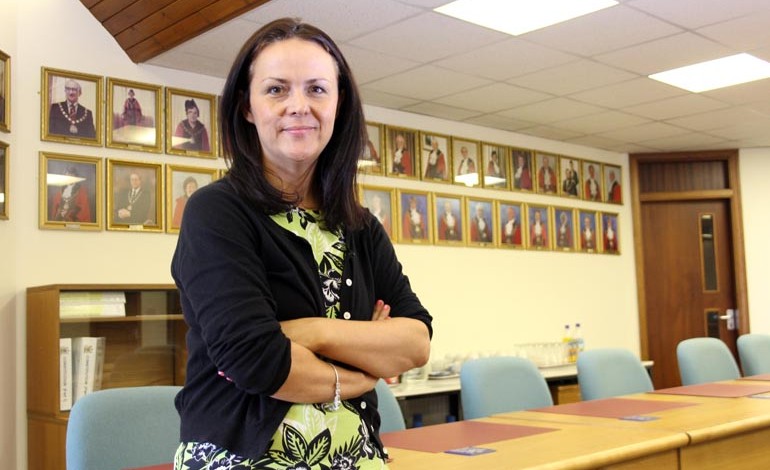 Dozens of retailers including high street shops are being asked to look at Newton Aycliffe as part of the town’s ongoing Neighbourhood Plan.

Commercial property agents Sanderson Weatherall, which has an office in Stockton, has been tasked with surveying retailers and leisure firms up and down the country after Great Aycliffe Town Council won funding from the Department of Communities and Local Government to carry out the research.

The results are expected within the next couple of months as Neighbourhood Plan manager Angela Corner (pictured) prepares for the second round of consultation with residents.

“Residents can be assured that the questions are being asked,” said Ms Corner.

“Questionnaires have gone to more than 150 firms – including all of the main high street retailers, restaurant and fast food chains and bars.

“They’re not being asked about rents or rates, they’re simply being asked if they would consider Newton Aycliffe and its demographics as a location – if not, why not… and if so, where would they want to be.

“We don’t know what the answers are going to be at this stage and how it will shape the plan going forward, but it’s a positive step that we’re at least asking the question.”

Aycliffe Council launched the Neighbourhood Plan last summer, when residents of the town were asked what they wanted to see happen over the next 20 years.

Retail, housing and environment were the three prominent concerns to come from the first round of consultation – with residents wanting better retail provision, and to maintain our green and open spaces.

Working groups were then set up to focus on the three key areas and to turn the issues raised into planning policies.

As part of the second phase of consultations, an ‘issues and options’ paper will be circulated to residents – both in print and online.

Ms Corner added: “We are looking to enhance the provision of older persons accommodation in particular sites which are close to services.

“We have clear options to protect the special greens across the town and furthermore sought funding to commission a professional to complete a character assessment which will capture what is special and unique about the town. The character assessment will steer the design of future developments.

“We’re also developing options for renewable energy to help make Aycliffe a better place for future generations, as well as liaising with Durham County Council to try to improve cycle paths and footpaths.

“Residents will get a chance to vote on their preferred options in the second round of consultation which will give us a very clear idea on how to take the plan forward.”

The issues and options paper is expected to be circulated to residents within the next couple of months.