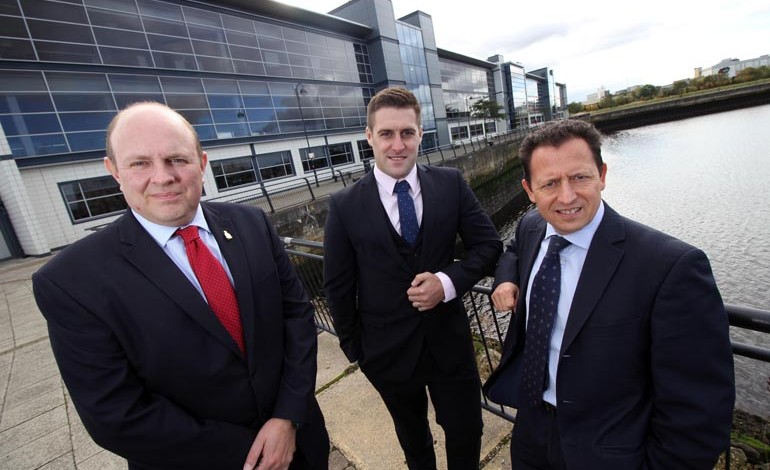 A family-run grounds maintenance and landscaping company is celebrating after winning three major contracts which has resulted in the creation of new jobs.

Beaumont, based on Aycliffe Business Park in Newton Aycliffe, is now maintaining 11 Dodds Brown-managed properties across the region, including its flagship site, Hudson Quay, next to Middlesbrough FC’s Riverside Stadium, which is home to Thirteen Group and Hertel.

The hat-trick of contract wins has led Beaumont to taking on two new operational staff, boosting employee numbers to 15.

It comes after the award-winning company, which specialises in general grounds and sports pitch maintenance, reported a 36% increase in turnover earlier this year.

Managing director Alexander Lineton is pictured above (centre) with Dodds Brown senior associate Richard Wilson (right) and facilities manager Andrew Carr at Hudson Quay in Middlesbrough, which is now being maintained by the Newton Aycliffe-based family-firm.

“Dodds Brown previously had five different contractors looking after different sites and they wanted to amalgamate it all into one.

“It was a competitive tender which we won, so we’re now their grounds maintenance provider for all their properties, and it’s certainly a big feather in the cap for us.”

From its offices in Middlesbrough, Dodds Brown is the largest independent commercial property surveying practice headquartered on Teesside, managing a portfolio of properties worth £70m.

Senior associate Richard Wilson said: “We were looking for a dedicated landscape maintenance contractor who could provide a quality service at a competitive price and be able to respond quickly to our needs.

“What impressed us about Beaumont was their attention to detail and customer service ethos.

“As a North East-based business ourselves we were delighted to be able to place the contract with a local company.”

Beaumont, which earlier this year was named Service Business of the Year at the annual Aycliffe Business Park “Make Your Mark” awards, invested £120,000 in new machinery during its 50th year in 2015.

It now has more than 150 sites on its books, including a range of public and private sector contracts as well as more than 50 schools around the North-East region.

Lineton added: “Although we’re growing as a company, we’re still very much family-run so we still pride ourselves on that family ethos.

“Our clients like the fact they can call us and speak to one of the family members. We’re very responsive and personal and it’s important we keep it that way.”