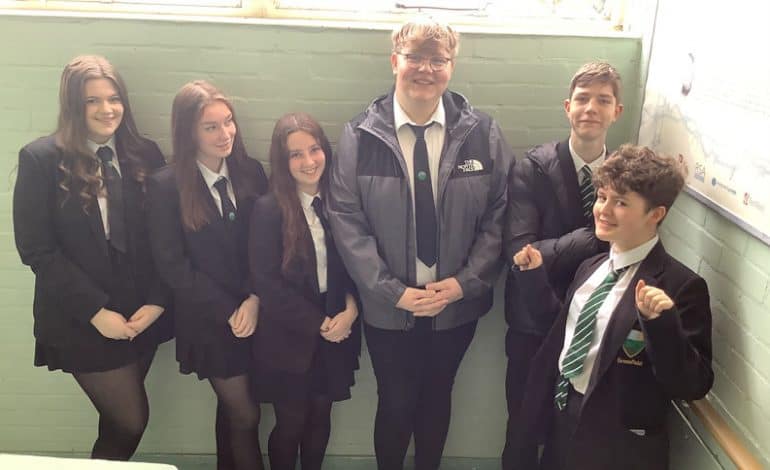 Students from Greenfield Community College have excelled and been chosen to be finalists in a prestigious UK poetry competition.

‘Poetry By Heart’ is a national competition where students across the UK can enter and have an opportunity to perform their poem at The Globe theatre in London.

The competition was promoted to the students in Key Stage 3 and 4 in English lessons and the students could decide if they wanted to be part of it.

They browsed independently through the different genres and categories of poetry on the official website until a poem spoke out to them – a poem that they were intrinsically motivated to learn.

The whole objective of the competition is to be able to recite and perform their chosen poem from memory.

Y11 students ‘kick-started’ their preparations in an enrichment class.

Students gave up their own time and spent a number of weeks meeting with Mrs Davison on a Thursday evening to practise learning their poems.

The students rehearsed them to a point where they could confidently have them recorded by video and sent off to the organisers.

Eight students took part in the recordings: Jack Lowe, Amy Errington, Sophie Capstack and Erin Davison from Y11; Grace Hardy from Y10; Owain McTighe and Hannah Lawson from Y9 and Alfie Hardy from Y7 and the standard was very high from all of our students. Well done.

From over 1000 entries nationwide around 90 finalists have been invited through to the next round of judging!

Three of those students are from Greenfield Community College: Jack Lowe, Amy Errington and Owain McTighe.

All three have been invited down to The Globe, in London to watch Shakespeare’s ‘King Lear’ on Sunday, June 19, and then to take part in a variety of poetry workshops including having an opportunity to perform on the stage at The Globe.

Unfortunately for the Y11 students this clashes with their GCSE Science examination, however the organisers have promised to give them an opportunity to have their magic moment next year.

“A big well done to all of the students involved, we are thrilled to see the resilience and creativity shown to bring about this achievement,” said a Greenfield statement.