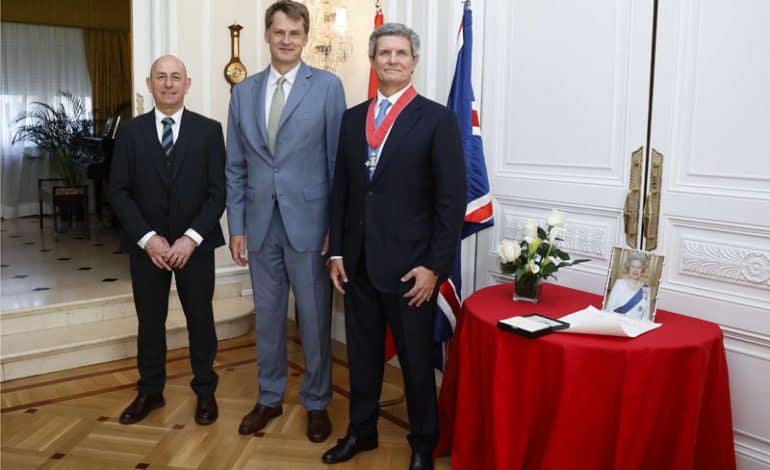 The chairman of a major Spanish-based UK employer has received a CBE for services to the British automotive sector.

Gestamp executive chairman Francisco J. Riberas Mera has been appointed Honorary Commander of the Most Excellent Order of the British Empire (CBE).

On behalf of Her Majesty Queen Elizabeth II, the recognition was granted by Hugh Elliott, Ambassador of the United Kingdom in Spain.

It was delivered in the presence of a small number of relatives and friends during an event at the British Embassy in Madrid last week.

Gestamp, which celebrates its 25th anniversary in 2022, has been in the UK since 2012 and currently has three production plants as well as an R&D centre.

During this time, Gestamp UK has become one of the main Tier 1 companies in the UK automotive sector.

In his acceptance speech, Gestamp’s executive chairman highlighted the strength of the ties between the two countries, and how the company works hand in hand with Gestamp UK with the commitment to overcome common challenges.

UK Ambassador Hugh Elliott said: “It is a great pleasure to present the Commander of the Order of the British Empire (CBE) medal to Francisco Riberas, from Gestamp for his services to the automotive sector in the United Kingdom.

The automobile industry is the UK’s main export sector. The company, which began operations in 2012, currently employs around 2,000 people at its three sites.

Newton Aycliffe, in County Durham, is the largest of the production plants with around 1,200 workers, which also has an R&D centre, one of the 13 that Gestamp has around the world.

The plants in the West Midlands, near Wolverhampton, and Llanelli in Wales complete the company’s UK operations.

Aycliffe plant manager Jonathan Phillips said: “We’re absolutely delighted that Mr Riberas and Gestamp have been recognised with this prestigious honour, and we offer our full congratulations from everyone here at Gestamp in Newton Aycliffe.

“Gestamp has been a major employer in the North-East region for many years and Gestamp continues to invest heavily in our people, facilities, research and development and in the training of our young local people.

“Mr Riberas’ recognition is testament to Gestamp’s commitment to the UK automotive sector and in creating jobs here in Britain – and we’re very proud he has received the CBE, the second highest honour to be bestowed on an individual for services to this country.”

Gestamp president Asia and UK Kevin Stobbs added: “It was a huge privilege for me to be invited to such a prestigious event.

“This award for Mr Riberas is a great honour and recognizes the continued investment and support by Gestamp into the UK automotive sector.”

The title of Honorary Commander is awarded to those who play a notable role at national level, an outstanding leading role in regional affairs through achievement or service to the community, or a highly outstanding innovative contribution in their area of activity.