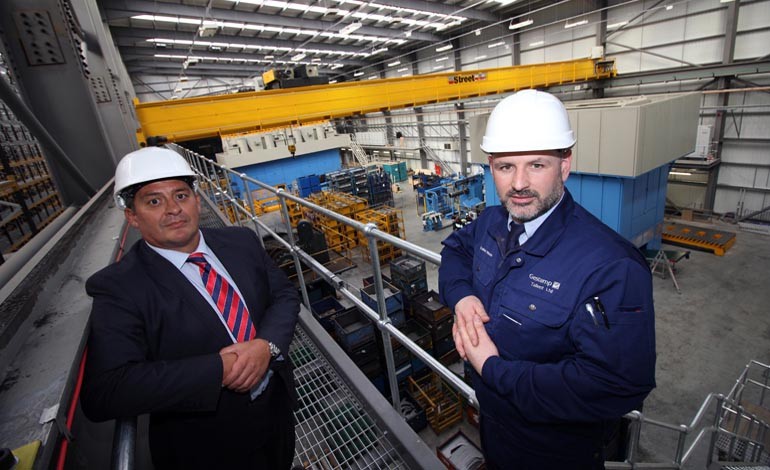 Gestamp Tallent’s latest investment in Newton Aycliffe has been developed by one of our own.

Graham Moore – pictured (above, right, with plant director Peter Gallone) left Greenfield School in 1991 and joined the then Tallent Engineering as an Apprentice Maintenance Technician.

Now Graham has been tasked with leading his team to manage the firm’s new-look press shop after a £11m investment.

You can’t miss Gestamp Tallent’s latest development – a 17-metre high extension to what was the oldest part of its Aycliffe Business Park site.

With an extra 3,900 square metres of floor space and 75 metres in length, the car chassis maker now boasts a huge press shop which is 250 metres in length and has an eye-boggling volumetric size of 1.8 million cubic metres.

It is also home to two new state-of-the-art presses – costing £6.2m between them – which will improve efficiency and output.

Production within the new part of Plant 1 has already started, and while it signals the end of a two-year design project for Graham, it is only the beginning of another exciting chapter for Gestamp Tallent – ensuring the production of car parts here in Aycliffe for the longer term.

It further cements Gestamp Tallent’s position in Aycliffe as the town’s biggest employer, as it continues to develop and invest in the future.

“It has given the team an opportunity not only to have conceived the presses, design the plant, bring the presses into the plant and install them, now we have got to make sure they do the job,” says Graham, 40.

“That’s the real challenge, because we have to make sure they work now and give Gestamp the return on investment we committed to. That means we need to get the plant up to the required levels of efficiency for large volume production.

“It’s a big responsibility, but major investments like this don’t come along that often, so it was a golden opportunity for our team to manage it and relish that responsibility.

“We’ve had a 12-year period without significant capital investment in the press shop, but now Gestamp have supported our proposals to invest, so we have to grasp the opportunity and do a good job, because it will be here for 30 years or more.

“You go from paper layouts to making it into a CAD drawing and then developing that into a plant over quite a short space of time, and you never lose that sense of ownership during that time.

“The responsibility from the outset is enormous, because there’s no margin for error.

“But it’s something we are very passionate about. Peter Gallone, the Plant Director, who worked very hard with Gestamp to secure the investment, calls me a press anorak, but I’m quite happy with that!”

Graham is a proud Newtonian, born and bred in Aycliffe and still lives in the town.

He’s also proud that his employers are ensuring long-term security and future jobs for our young people.

“This is a 30-plus-year investment,” he says. “We have presses that have been on site since 1982, so that gives you an idea of how long we want these facilities to carry on producing parts here in Newton Aycliffe.

“When people drive past and they see a 17-metre tall building coming out of the ground, they can see there’s investment here and it’s great for the town and the area.”

He said: “This shows how important our people are to us, and we are to them.

“We employ more than 1,300 people directly – and hundreds more indirectly through our supply chain – which means we’re contributing significantly to the local economy, which we feel is important.

“We also think it’s important that we communicate with both our employees but also the local community, which is why we have consciously decided to run a series of articles in Aycliffe Today Business.

“It’s part of my plan to open up to the local businesses and the local community, to help them understand what we do, in the hope that we continue to attract local people as employees.”

Graham has revealed how the Plant 1 extension idea was first born when Gestamp acquired the Aycliffe site in October 2011.

He explains: “The press shop was one of the last remaining old low level buildings within the plant and the first part of what used to be known as Tallent Engineering.

“It was the next major development for the purpose of bringing in new presses, and the work we’d won dictated we needed new facilities.

“We had capacity issues and we recognised that we needed a new transfer press and a progression press. So early in 2013 we put the business case to Gestamp and they authorised the investment.

“Then it was a case of putting the project into plan. It was my responsibility, as press and facilities engineering manager, to develop the new presses from an engineering point of view and look carefully at how we design the new presses, taking into account our current facilities.”

Graham and his team oversaw the design and build of two presses which were assembled in the Basque region of Spain, Gestamp’s homeland.

Once approved they were then stripped down and shipped to Newton Aycliffe over land and sea. With the construction of the Plant 1 extension ongoing – and with the clock ticking – the press components arrived on Aycliffe Business Park in early January. One vessel was chartered to bring the main heavy parts by sea, while 15 curtain-sider wagons brought the rest by road.

“We’ve overseen the whole project, from seeing the steel coming out of the foundries to it being assembled at fabrication shops,” adds Graham.

“The 4,000-tonne press was assembled in a place called Arrasate near Bilbao, Northern Spain. We conducted the buy-off in November last year with a team of engineers who had worked on the press throughout its build.

“It was then signed off then the stripping of the presses and the transportation process began, making sure the plant was finished in time for the arrival of the parts.”

The parts arrived, and two presses – a 4,000-tonne transfer press costing £4.2m and a 1,500-tonne progression press costing £2m – are now in place, sitting in seven-metre deep pits and surrounded by sound-proof “cabinets” to minimise noise.

The transfer press will produce 6.3 million strokes a year, while the progression press will do 12.7m annually – combined they will help Gestamp Tallent meet the needs of customers such as Jaguar, Landrover, Volvo, Ford, BMW, Nissan and Honda.

The extension also includes a new high-bay racking system, with no less than 4,500 locations for products which will be produced from the press shop.

“It’s been a real challenge to get to this point,” adds Graham. “The progression press is ready for production and we expect the transfer press start production in May some time.

“Ultimately they will relieve the additional workload and capacity that we couldn’t previously manage within the plant.

“We have older presses running 24-7 on a Continental shift pattern, so this investment will take the pressure off the older presses and help to improve efficiency.”

Turnover has grown substantially in that time, and expects it to increase by 16% this year with a further 12% increase by 2017.

The firm has taken on 150 new people in the last eight months, increasing its workforce to 1,322, while long service statistics continue to impress, with 42 employees completing 25 years’ service this year alone.

Gestamp Tallent also develops local engineers and tool makers, with 52 Apprentices currently with the company and plans to take in 10 a year up to 2018.

The £1.3m investment in the Gestamp Tallent Training Academy has also transformed the former Sanyo site into a state-of-the-art training facility which will not only train Gestamp’s workforce of the future, but will also help them to develop their existing staff.

The Gestamp group has almost 100 plants worldwide covering Europe, North America, India, China and Turkey, with five of those in the UK including Cannock in the Midlands, Fareham on the South coast, Llanelli in Wales and Washington, as well as its biggest UK site, Gestamp Tallent, in Aycliffe.