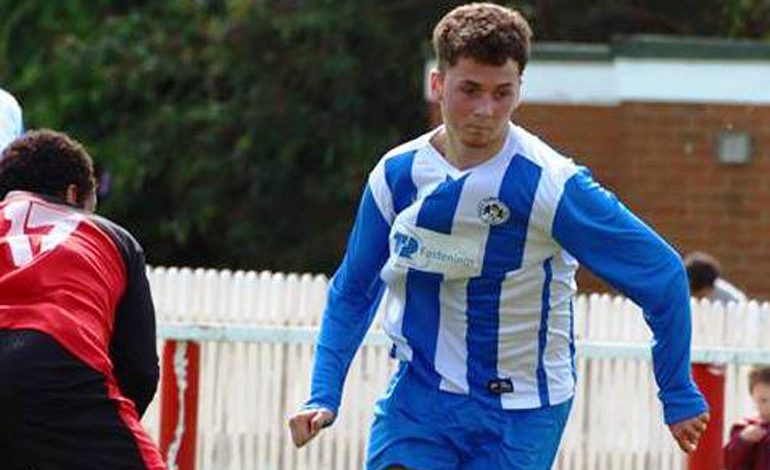 Following the first game of the season’s 14-goal encounter, Newton Aycliffe Sports Club were again involved in high scoring game against Darlington RA, this time though lacking the fire power for a positive result.

It was always going to be a tough game after losing goalkeeper Andy Hartley in the first few minutes with a head injury.

Again playing away from home, the Sports Club were two goals down within the first 20 minutes. Chase McMullen managed to get the visitors back in the game with a long range free kick on 25 minutes but the hosts restored their 2 goal lead shorty before the break.

Kyle Allen made it 3-2 shortly after the break and when the home side were reduced to 10 men on the hour mark it looked like the Sports Club would actually manage to get something from the game. However, this wasn’t the case as the 10 men of Darlington continued to stretch the opposition and creating numerous chances and went on to win the game comfortably 6-2, a tough result for the Sports Club to swallow. MoM: Chase McMullen

With games coming thick and fast, next up was Spennymoor Ash Tree, again away from home for the first evening game of the season. The Aycliffe side started brightly with Darren Bosomworth coming close with a one on one after 5 minutes breaking down the left wing but shooting straight at the keeper. Jimmy Cameron then followed suit from the right wing, cutting in and striking across the face of the goal agonisingly just wide of the far post. A similar move created the first goal, Jimmy Cameron again cutting in from the right wing, this time slotting home to give the visitors the lead on the 15 minute mark.

The lead only lasted for 10 minutes though with the home side responding well and equalising after closing down keeper Sean Redpath and forcing the ball home. With both sides evening each other out it wasn’t until midway through the second half before the deciding goal was scored and the home side secured the 3 points. MoM: Jimmy Cameron (pictured above)

Next up for the Sportsy was Escomb Saxon, again, away from home. This was a game the Sports Club were desperate to win and with a big squad to choose from, the away side looked to ensure the points were brought home. The game itself was lacking in quality, with neither side causing any damage in the final third of the pitch. The pick of the chances fell to Ryan Durr who missed a glorious chance for the visitors to take the lead, volleying high and wide when he really should have done better with the whole goal at his mercy. Although looking comfortable the Aycliffe side conceded after Gareth Boyes lost the ball on the edge of the area and the ball was slotted home past keeper Sean Redpath to make it 1-0 on 55 mins.

It took only 5 minutes for the visitors to respond after a penalty was awarded when substitute Anthony Campbell was fouled inside the area. Ryan Stonehouse stepped up to smash home the spot kick and make it 1-1. The remainder of the game continued to be scrappy, with no real clear cut chances, but Sports Club was still controlling the game from midfield. It took a wonder strike from Stuart Hackett with just 5 minutes remaining to win the game for the away side to earn the much needed 3 points. MoM : Jimmy Cameron