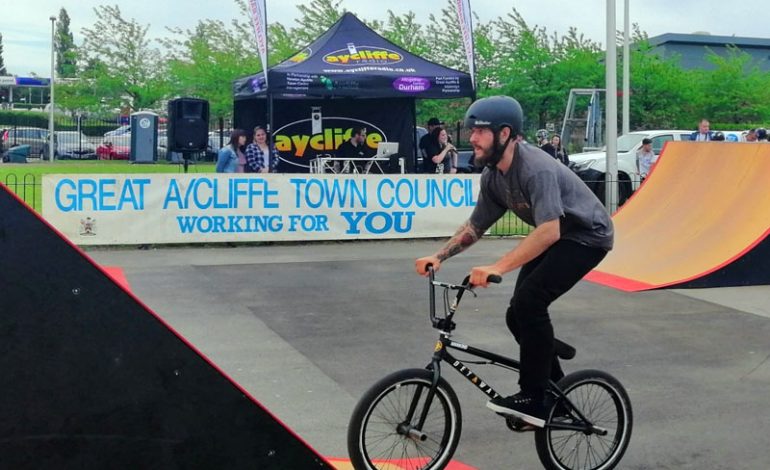 Some of the best professional riders arrived from across the country to demonstrate their skills and show off what can be done using the new ramps.

Fearless Ramps and the professional riders were on hand to encourage many of the local riders to get involved.

They then watched during the event and awarded prizes to the best local participants, many of whom came away with fantastic free give-aways from Fearless Ramps.

Aycliffe Youth Council also awarded a trophy and a voucher of £100 to the best local rider at the event.

This was won by Robbie Richardson, a local rider whom Fearless Ramps identified as an excellent, passionate BMX rider with fantastic skills and a fearless attitude towards his riding.

Inflatable rides were also provided free of charge by the Town Council, to offer additional fun to all those who had come along to this event on a sunny bank holiday weekend.

Rides included an eight-man ‘Total Wipeout’ game, which proved a massive hit and a great deal of fun to many competitive youths who wanted to be the last one standing.

“Great Aycliffe Town Council would like to acknowledge Aycliffe Radio, who were on hand to host the event,” said a spokesman for the council.

“Their team of volunteers were very professional and enthusiastic, and did a great job of compering the event and keeping the considerable crowd entertained.”