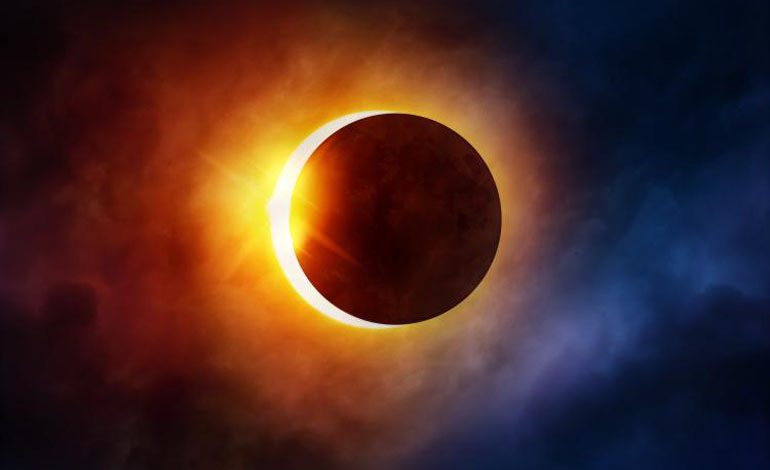 Newton Aycliffe will today fall into complete darkness during a spectacular full eclipse of the sun.

Scientists say the blackout will only affect the South West area of County Durham during the once-in-a-lifetime phenomenon, known as a Polar Foil.

A group of Pagan worshipers from Wiltshire are set to descend on the town for the miraculous event.

They’ve planned a Pagan march from the Hitachi factory on Aycliffe Business Park to the clock tower in the town centre during darkness, which is expected to happen from around 12noon.

The eclipse has baffled boffins at Teesside University.

Xander Wrigglesworth, head of science and weird phenomena, told Aycliffe Today: “This Polar Foil is truly a once-in-a-lifetime experience not to be missed.

“Full eclipses of the sun are rare for the UK, but they’re particularly rare for this region and it’s not yet known how long it will last for, but we estimate around 20-30 minutes.

“We’re expecting Newton Aycliffe to be one of the best parts of the County Durham area to experience it.”

An eclipse of the sun occurs when the moon passes between the sun and earth, and the moon fully or partially blocks the sun.

This can happen only at new moon when the sun and the moon are in conjunction as seen from earth in an alignment referred to as syzygy.

In a total eclipse, the disk of the sun is fully obscured by the moon. In partial and annular eclipses, only part of the sun is obscured.

Updated at 12noon: In case you didn’t already spot it, this was of course an April Fool. There was no full eclipse – Polar Foil was the key clue!