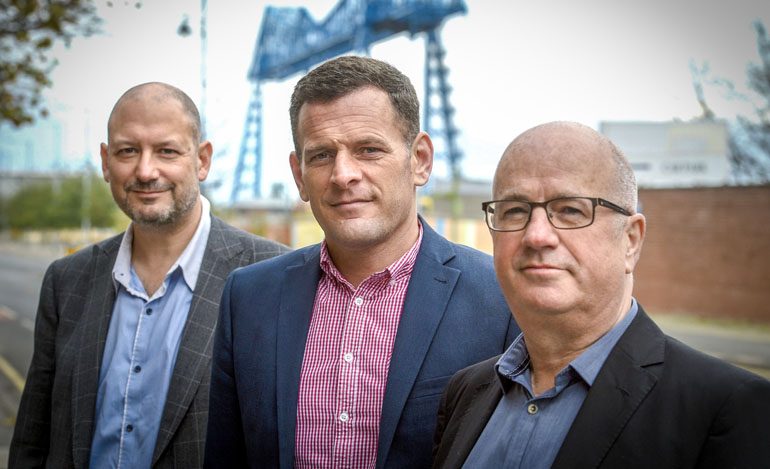 The move is designed to help Resolution, which is run by ex-Middlesbrough FC colleagues Martin Walker (above, centre) and Dave Allan (above, left), to build on existing publications while rolling out new projects.

“I’m delighted to be joining Dave, Martin and the team,” he said.

“Their achievements since launch have been outstanding, the Tees Businesswomen Awards being a great example.

“Tees Business has an excellent and growing reputation in the business community, and I look forward to helping them accelerate their ambitious plans.”

Middlesbrough-based Resolution – named after Captain Cook’s HMS Resolution – was launched in early 2017 after the success of their pilot publication, Tees Business.

Resolution’s printing work supports Tees firm MV Print and its 22 employees, while they also support a pool of more than 10 local freelance photographers, writers and KINSHIP, a local design agency.

Co-director Walker, who also owns Newton Aycliffe-based Mantis Media – publishers of Aycliffe Today Business – and hails from the town, said: “We have some exciting ideas but as the company has grown, it was important to bring in someone who could be a critical friend to the business, provide us with honest advice and to bring ideas, so to have someone with Bob’s experience in publishing is a huge boost.”

Allan, who also owns Middlesbrough-based DNA PR and Publicity, added: “We’re delighted to have brought Bob on board during this exciting time for the company.

“He has bought in to what we’re trying to do, he shares our passion for print and he will give us invaluable knowledge and expertise as we drive forward our plans.”

Walker, who trained as a journalist with the Gazette, worked in Allan’s media team at Boro from 2000 to 2005 and then spent four years in Sunderland AFC’s PR team before starting his own business.

He launched aycliffetoday.co.uk seven years ago before launching the associated Aycliffe Today Business publication in November 2012.

Promote your business to 20,000+ Tees audience

The Tees Business team will soon be working on the first issue of 2019 – and Aycliffe businesses have an opportunity to market to their exclusive 20,000+ B2B audience from just £275.

Tees Business also publish the region’s only website dedicated to business news from the Tees Valley region, as well as a weekly e-news to 1,400 subscribers.