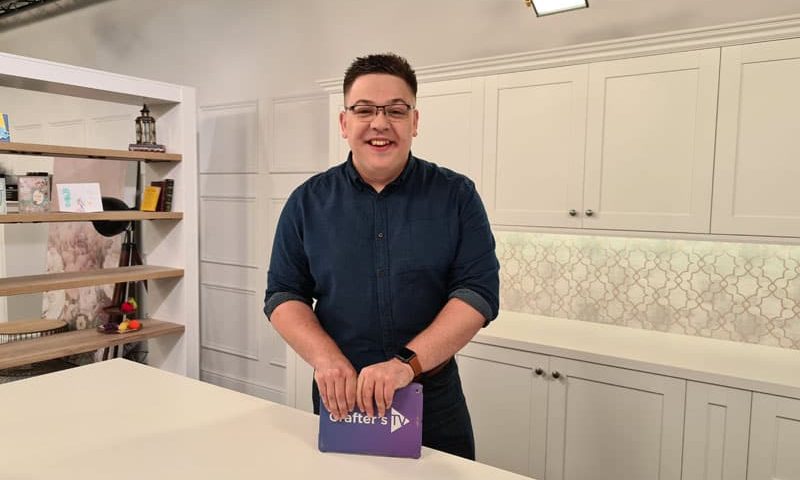 Crafter’s TV, the digital platform owned by Crafter’s Companion, is welcoming another new presenter to its team.

George Akid will join Becky Redican, Ben Moseby and Joe Remblance as a presenter on the popular crafting platform.

His new role will involve working alongside Crafter’s TV’s craft experts, helping to guide viewers through the variety of shows in the platform’s busy schedule, as well as communicating with the engaged audience through social media.

The presenter, who is from Barnsley, South Yorkshire, began his career at Butlins working as a Redcoat, where he gained valuable experience presenting and interacting with the public.

Since then, George has continued to work in the entertainment industry and has travelled to countries such as Dubai and Finland for different roles.

Every December, George enjoys performing in pantomimes in theatres across the UK.

Previously, George has enjoyed being involved in the creative elements of costume making in his pantomime roles. He was introduced to the crafting world by fellow Crafter’s TV presenter, Ben Moseby.

George said: “I had no idea how huge the world of crafting is but now that I do, I’m keen to learn so much more! My first impressions of Crafter’s Companion have been amazing – there’s an instant sense of family as soon as you walk through the door.

“I have loved working with the team so far and I’m looking forward to getting to know our amazing family of viewers, while sharing their knowledge and stories throughout the different shows.”

Jeni Santillo, head of broadcast operations, added: “George brings a fantastic amount of experience with him to Crafter’s TV.

“His personality and energy really complement the existing dynamic among the team and we know he will be a hit with our audience, as well as our wider crafting community.”