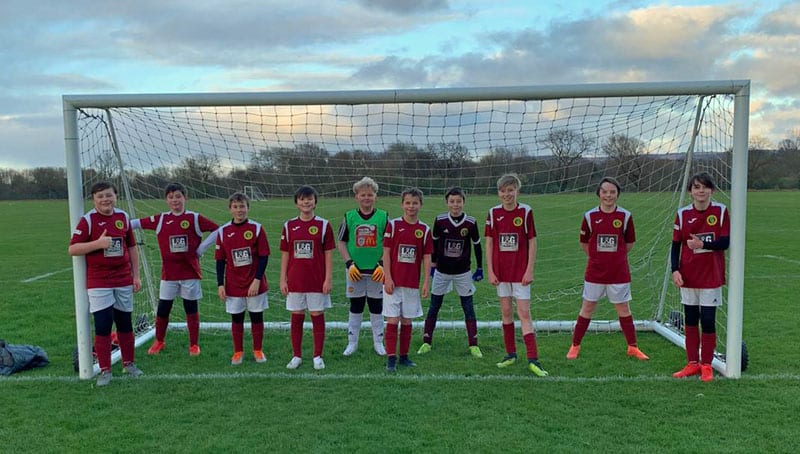 Newton Aycliffe’s junior teams returned to action at the weekend after the long Covid layoff.

Aycliffe U8s whites played away to Harton and Westoe avengers.

Aycliffe started the game well but looked very rusty and need some extra training but saying that Aycliffe’s goals were excellent from goal scorers William and Oscar. MOTM was awarded to Oscar.

It was a fantastic return to football for the Aycliffe U9 Blacks against Brandon. While the result was great the determination and work rate was equally pleasing to watch. First half Aycliffe took the game straight to Brandon with a goal for Rhys but then Brandon conceding an own goal. Aycliffe came out in the second half with their heads up and went on to dominate with further goals from Charlie and Benjamin. Chances after chances for all the players today and they were unlucky not to add to the tally. All round great performance and a very well deserved clean sheet. MOTM went to Rhys though it was tough to choose as all the team played superbly.

Aycliffe U9s whites played against Darlington Allstars. Aycliffe were a bit rusty in spots and their fitness level showed, they still managed to play as a unit putting in an impressive display together with a brilliant result. Goals from Jonah, jack, James and Dom, MOTM was awarded to Dom

Aycliffe U11s played Stranton FC. Aycliffe needed a good run out and today’s opposition who are in the division above them were up for it. Aycliffe gave it their best and had a few chances but overall Stranton AFC was just too good. There were some positives from Aycliffe they can work on.

Aycliffe U12s Blacks played at home to Farringdon Detached Red. Aycliffe started slow and looked really rusty. They conceded an early goal but kept their heads up and equalised with Alex scoring. Farringdon then controlled play to go back in front; first half Aycliffe went in 2-1 down. The Aycliffe manager must have given his team a good team talk as they came out to score four more goals in the second half with goals from Keaton, Joe, Alex and Danny making sure Aycliffe finished up winners. Final score was 5-2. MOTM was awarded jointly to Alex and Steven the captain

Aycliffe U12 Whites (top picture) started their return to football with an impressive 5-0 win over Linthorpe. Goal scorers were Jack twice, Oliver, Ethan and Jake all on the score sheet. Ellis had a quiet match in goal but did well when called upon. Every player showed improvement from before lockdown and their attitude to passing more and using their team mates was evident and allowed Aycliffe to apply a lot of pressure. Man of the match was awarded to Jack.

Aycliffe U13s whites drew 3-3 away at pools youth. Scorers were: Niall, Connor & Aidan. Great run out for their first game back.

Aycliffe U14s won a scrappy game 2-1 against Seaton Carew from a division above them, after falling behind to an early penalty late goals for Reece and Jake give them victory.