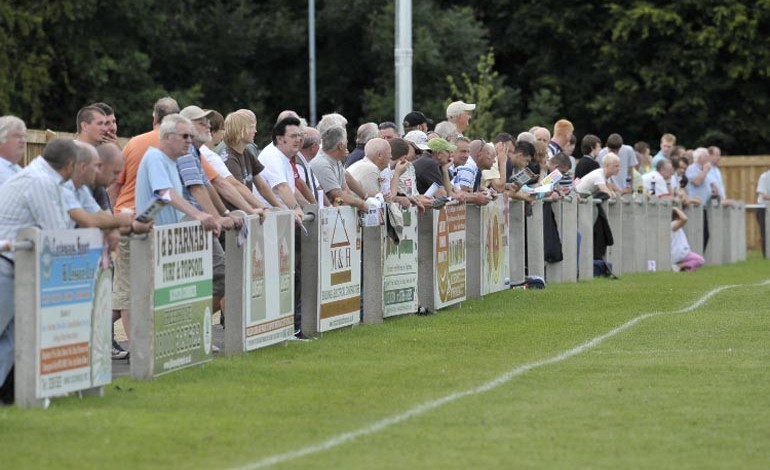 After a few years flirting with relegation, Newton Aycliffe are back at the right end of the Northern League table. The club is creating history almost every week and there is a real sense of success within Moore Lane Park. The club’s once vociferous and loyal support has become detached in recent seasons however.

Just three weeks ago, Newton Aycliffe created history by staging an FA Cup second round qualifying game, with 253 fans flocking to Moore Lane Park in the hope that their little town could etch its way onto the footballing map. The fact the club narrowly missed out is irrelevant.

Ok, so it’s a far cry from the days when 350 people used to flock to Moore Lane Park for the visits of Hebburn Town or Chester-le-Street on a regular basis in the second tier of the Northern League, but 253 nonetheless was a positive sign that things off the field were making par with things on it.

Last Saturday, the FA Cup heroes despatched Newcastle Benfield – stretching their unbeaten run to six – with relative ease, lifting them into the top half of the table. Should results in Peter Dixon’s team’s games in hand go their way in the coming weeks, the Newtonians could sit as lofty as third.

Less than 80 people were in attendance.

Aycliffe’s average gate this season is just 107. The sixth lowest in the first division of the Northern League. Just four years ago, as the team cruised to the second division title, Aycliffe boasted the fifth highest attendance across both divisions.

So where have the fans gone?

The Darlington factor hasn’t helped, but that’s not the reason. There have been many occasions in the past two years when Darlington have been away from home, yet their Aycliffe-based support have neglected to make the alternative trip to Moore Lane.

Sunderland were away from home on Saturday, and in truth, their fans would probably give up their tickets in favour of watching a winning team at present. Newcastle weren’t even playing and you can’t tell me Middlesbrough have taken back their share of Newtonians?!

The whispers around the aisles of Tesco and the toilets of the town’s watering holes is that it’s down to the fact that there’s not a single Newtonian in the team, so the team has lost its identity. I can tell you now, that goes for 95% of all teams at this level, so surely this cannot be the reason…can it?!

You can’t tell me Bishop Auckland have a stable of players from the DL14 postcode. Shildon to my knowledge don’t have a player from the town, and if they do, it’ll certainly be a small number. I could go on; I won’t, I think I’ve made my point.

I don’t believe for one minute that if Peter Dixon altered his recruitment policy and picked players from a one-mile radius of Moore Lane Park, and sacrificed the club’s league position and current form, that the crowds would come flocking back. Who wants to watch a losing team?! Ask those Sunderland fans…

The people of this town need to get behind the club. Get behind the badge. Players, managers, even us committee staff will come and go, but the team will always be there. And it needs your support now, more than ever. In order to continue to service a winning team, we need a winning support. Just look at the resurgence of both North and South Shields in the past season or two.

The club is on the brink of something special. Peter Dixon led us to our first cup final in the Northern League last year and our historical FA Cup run this season. We all know what he done for ‘little’ West Auckland in the FA Vase in recent years.

Don’t miss out on this fabulous roller coaster. We are offering good football, at affordable, community prices. Under 12’s can watch for free with a full paying adult. We have some excellent facilities which some Northern League clubs would be proud of. We are your local team and we want the people of this town to be proud of what they have.