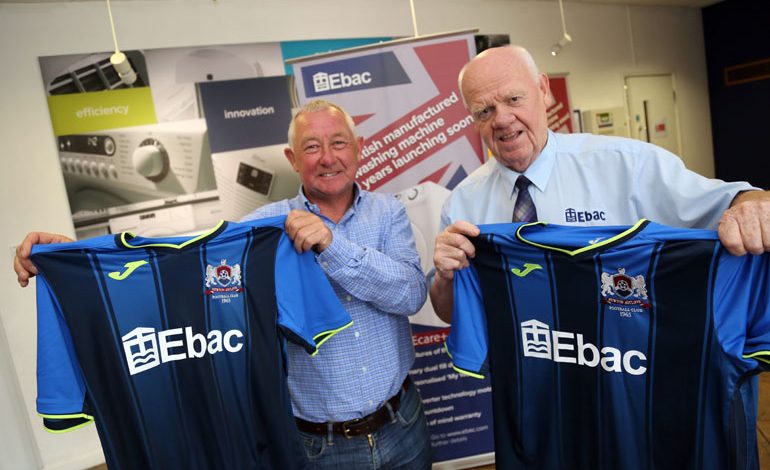 Newton Aycliffe firm Ebac has shown its support to the local community by sponsoring the town’s football club in a record-breaking deal.

“Ebac have helped us out massively here and it has taken a monumental weight off my shoulders,” said Oliver.

“Long-term we want more people through the gate. But to do that you need a winning team.

“I always compare it to the cinema – if it’s not entertaining, you don’t go. But if you have a winning team, they will come, and that’s what we’re striving for, to get supporters through the door.

“Support like this will certainly help. And with the size of this business park, we’d be eternally grateful if other businesses got on board.

“There are a lot of places up and down the country where you’ve never been, but you’ve heard of the football team, and we’d like to put Newton Aycliffe on the map.

“More support from businesses will help us to do that by improving the team as well as our facilities.”

“We’re famous for sport, we’re very good at it and the more we can do to support it the better.

“Newton Aycliffe is Ebac’s local team and I think Allan Oliver has done a great job there over many years.

“I’ve known him for a few years and I think he’s really performed well. It’s a real grass-roots club with real people working together.”

Elliott has urged other business to follow suit and back the town’s local club.

“You mustn’t look at this as a commercial venture,” he added.

“It’s not about making money, it’s about putting money back into society and into the community.”