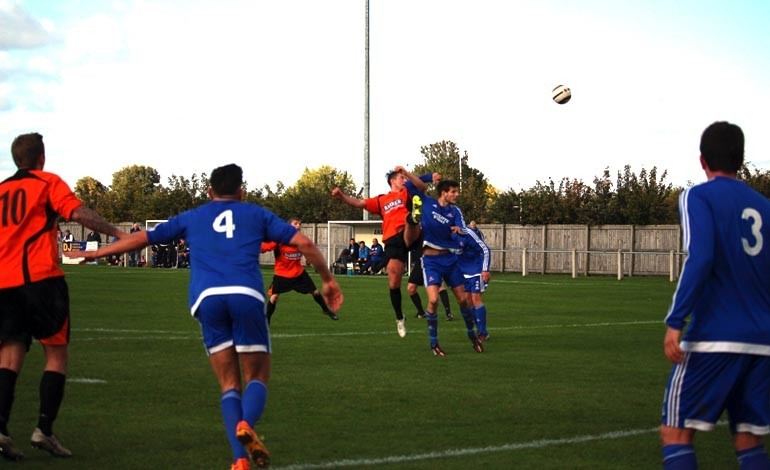 Aycliffe remain unbeaten at home this season with this win against Newcastle Benfield.

As was the case with last week’s 5-0 win at Durham it wasn’t until the second half that Aycliffe took control.

Aycliffe went into the game without both high-profile strikers Matty Moffat and John Campbell, although Alex Kitchen and Dennis Knight returned from suspension.

It was Newcastle Benfield who scored first, after 23 minutes. A cross to Shane Jones found the Benfield forward with plenty of space and he made no mistake with his shot.

Within a minute Aycliffe might have equalised but Knight’s free-kick was saved by Benfield keeper Mark Cook.

A few minutes later the home side were again on the attack with a good cross from Ashley Coffey finding Stuart Banks whose shot was blocked.

The equaliser eventually came with Coffey this time being on the receiving end of a cross. The Aycliffe forward’s powerful header from close range giving Cook no chance.

Aycliffe started the second half in determined fashion and were soon rewarded with Banks scoring after 53 minutes.

Benfield came close to drawing level with 65 minutes gone but a fantastic save from James Winter preserved the lead.

Aycliffe supporters have become used to seeing some great saves from their keeper but his effort, diving to his right to reach Lewis Scorgie’s six-yard shot, was one of the best.

The game was put beyond doubt on 73 minutes when Paul Garthwaite fired home a powerful shot from the edge of the penalty area.

These three points took Aycliffe’s total to 20 from 12 games. They sit 11th in the Ebac Northern League Division One but, thanks to the excellent FA Cup run, have up to four games in hand on some above them.

Aycliffe now play five consecutive away league games. They will though play at home on Tuesday 27 October against Stockton Town in the Durham Challenge Cup. That game was also scheduled to be away but has been reversed because of Stockton’s lack of floodlights. Admission is reduced for that game; adults £4, concessions £2.