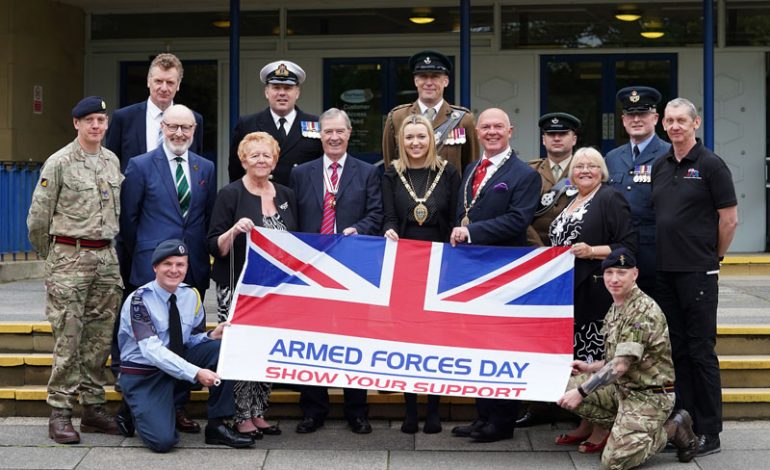 Durham County Council will be flying the official armed forces flag at County Hall this week to mark Armed Forces Day on Saturday (June 20) and Reservist Day on Wednesday (June 26).

Chairman of the Council, Cllr Katie Corrigan, also hosted a reception for representatives from the armed forces and council employees who serve in the reserve forces.

Last year, the council was one of only 50 employers, including ten local authorities, in the UK to receive a Gold Award through the Ministry of Defence’s Employer Recognition Scheme. The award recognises employers who demonstrate positive attitudes and policies towards serving and ex-members of the Armed Forces.

The council’s work has included the recent introduction of a policy which offers up to 10 days of paid leave for employees who are also Uniformed Cadet Force Adult Volunteers to attend their annual training. A similar policy, for staff who are reservists, has been in place for some time and has been used as an example of best practice by other local authorities and businesses in the region.

The council also runs a guaranteed interview scheme for veterans, enabling those who meet the essential criteria for a post to overcome any barriers to recruitment opportunities, and, in partnership with other local authorities in the region, Durham County Council offers an Armed Forces Outreach Service, which provides help and support to all forces’ personnel, reservists, veterans and their families,

Cllr Lucy Hovvels MBE, Durham County Council’s armed forces champion, said: “Armed Forces Day is a chance for us to demonstrate our commitment to all those from County Durham who serve and have served in the armed forces as well as their families.

“We are very proud to fly the armed forces flag from County Hall.”