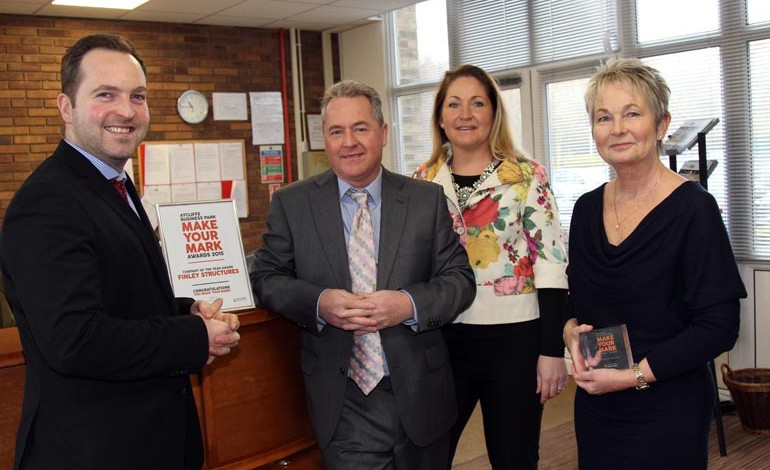 Companies are being urged to enter Aycliffe Business Park’s third annual awards competition to be held early next year.

Make Your Mark 2016 will single out the business park’s shining stars and recognise outstanding performances during a glittering black-tie event at the Xcel Centre in March.

And the winners of last year’s Company of the Year accolade are urging fellow Aycliffe businesses to get involved in what is the third consecutive awards bash on the park.

Managing director John Finley said: “It was an honour to pick up the Company of the Year award last year and the icing on the cake for us after a fantastic year in business.

“The Make Your Mark awards is a great way to celebrate all our successes on Aycliffe Business Park, to not only win recognition for ourselves but also to congratulate our neighbours.

“We look forward to this year’s event and we’d urge all companies of all shapes and sizes to consider the categories and to enter.”

The 2016 Make Your Mark ceremony, on Wednesday March 1, will be the first to be delivered by the new Aycliffe Business Park Community (ABPC) which was formed earlier this year.

The company’s chair, Kerina Clark, said: “Even though the previous two Make Your Mark awards events were hugely successful, we’re now in a much stronger position, as an official entity with 11 board members, to hopefully deliver an even better awards event this time around.

“We look forward to receiving the entries from the many successful companies we have on the business park and celebrating our collective successes at Newton Aycliffe’s business event of the year.”

An independent panel of judges will decide on 10 awards for this year’s Make Your Mark event, including Apprenticeships, Employer of the Year, Engineering and Manufacturing, Export, Heart of the Community, Innovation, Newcomer, Service Business, Small Business and Company of the Year.

The deadline to enter the 2016 Make Your Mark is 20th January 2017, and businesses can enter online easily at www.aycliffeawards.co.uk