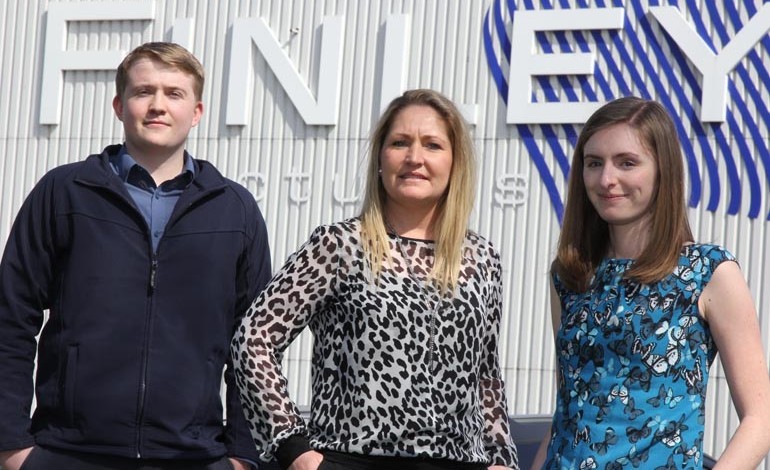 Finley Structures is investing in the future with the appointment of two new graduates.

The steel firm has appointed Natalie Chewter as assistant quantity surveyor, and Tom Radcliffe as a graduate structural engineer.

Natalie, 22, from Spennymoor, graduated from Northumbria University with a degree in Geography before going on to take a two-year distance learning Masters in quantity surveying while working with Finley Structures.

Working under the firm’s commercial manager Diane Ruston, the former Tudhoe Grange School and Durham Sixth Form College student has already been working on exciting new structures, including a University Technical College in Scarborough and the Sir Isaac Newton building at the University of Lincoln.

“I’m really enjoying the variety of tasks that I do within the role, and I’ve recently began working on some of my own projects which is exciting,” said Natalie.

“I’ve always wanted to work within the built environment, it was just a case of fine-tuning what I wanted to do.”

Tom is a former Longfield School student from Darlington and graduated from Teesside University in 2014 with a degree in civil engineering, after studying A-level Maths, Physics and Biology at Queen Elizabeth Sixth Form College in Darlington.

Working under senior structural engineer Steve Sandford, Tom has already worked on a number of projects including the Sarah Swift building at the University of Lincoln, a Skyline project at Heathrow Airport and Abbotsfield School in Hillingdon, London.

The 22-year-old, who plans to take his Masters in civil and structural engineering, said: “I’ve always enjoyed Maths and sciences so I have wanted to be an engineer from quite an early age. It’s something I have always found interesting.

“I saw some of the work Finley Structures had done, some of the high-profile jobs like Hitachi Rail Europe and Redcar Pier – landmark, iconic buildings – so I saw it as an exciting place to work.”

Finley Structures joint managing director Julie Raistrick added: “We’re delighted with both appointments and pleased to see them settling in to their new roles quickly.

“It’s important that we look to bring young people into the construction industry.

“There’s a skills set which will weaken in the years ahead and it’s important that we try to bring the younger generation through.”