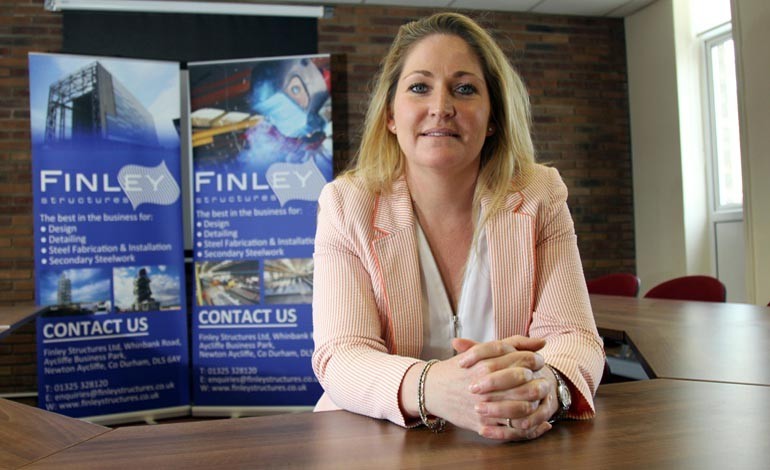 A Newton Aycliffe family group of companies has been boosted by a new record year for its steel construction division.

During that time, the steel fabrication firm has also taken on eight new employees – boosting staff numbers to 68 – while working on high-profile contracts across the region.

The firm has also worked on a 2,300-tonne project at the Victoria Gate shopping centre in Leeds – a deal worth close to £4m.

And during the 2014-15 financial year, the Aycliffe outfit also built Nissan’s new Leaf factory, a 1,400-tonne project, the 500-tonne Sports Village in Middlesbrough and a 300-tonne frame for the £38m National Biologics Centre in Darlington, which opened recently.

In addition, Finley Structures completed a 500-tonne project for Teesside University and a 620-tonne contract for the University of Sheffield’s Advanced Manufacturing and Research Centre (AMRC) to round-up a busy year.

It comes as its sister company, nearby SCH Site Services which employs 36 people, continues to perform strongly, while Finley’s also launched the ROF 59 activity centre this summer, a new leisure venue built on one of the former Royal Ordnance Factories at Aycliffe Business Park which employs another 15 full-time and 15 part-time staff.

Joint managing director Julie Finley says it’s been a hugely positive and progressive period for family firm, which was formed by her father, John, in 2000.

“The construction industry continues to have its challenges but it has been an exceptional year for the Finley group,” she said.

“Finley Structures’ financial performance for the year end March 2015 has been largely down to the two large, high-profile contracts in Hitachi for Shepherd Construction and Victoria Gate for Sir Robert McAlpine.

“During the timescale of the Hitachi contract alone we took on eight new staff – four in the office and four on the shop floor – to cope with the amount of extra work, which means we’re up to record employee levels.

“SCH continues to do very well and ROF 59 is an exciting new development for the company which has seen our combined staff numbers reach almost 130.”

Earlier this year, Finley Structures won a multi-million-pound contract to build new schools across the region with major contractor Galliford Try, a national firm which has offices across the UK including Washington, Tyne and Wear.

It’s the first time Finley Structures has worked with Galliford Try, a FTSE 250 housebuilding and construction group which employs around 5,000 staff nationally.

The family firm has also won a number of other new contracts, including a 270-tonne project for Interserve at York University’s Biomed Building, a 600-tonne contract at Navigation Park in Enfield for A&H Construction and a 430-tonne job for Sir Robert McAlpine at Workington Academy in Cumbria – which are all currently on site.

“There’s a lot going on and we’re now working on more and more contracts outside of the North East region,” added Julie.

“We’re especially delighted to be working on projects with new clients as we continue to strengthen the excellent relationships we already have with all the major contractors. It certainly continues to be a hugely positive time for the company.”

Founded by John Finley in 2000, Finley Structures has three sites on Aycliffe Business Park – its head office and main factory on Whinbank Road, its SCH site on Beaumont Way and its new ROF 59 site on Durham Way South.