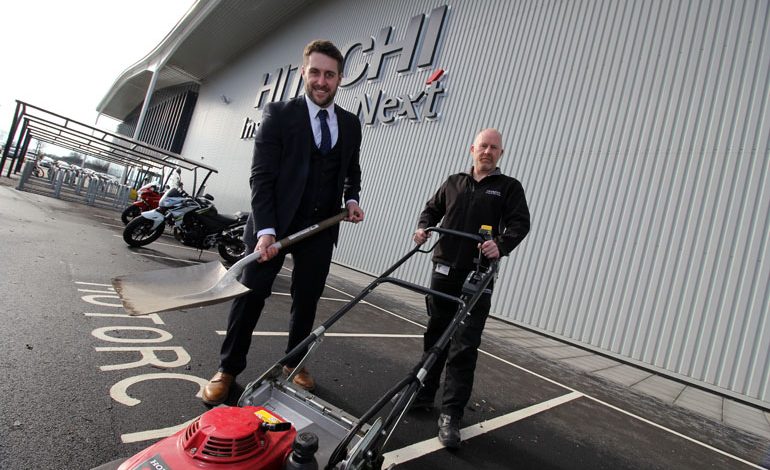 Hitachi Rail has agreed a deal with neighbouring Beaumont Grounds Maintenance to look after its 42,700sqm site on Aycliffe Business Park.

Beaumont is now charged with the upkeep of the Hitachi rail vehicle manufacturing facility, which was officially opened by David Cameron in September 2015.

The deal comes just a few months after Beaumont celebrated another record year which saw an increase in workforce and turnover.

Managing director Alexander Lineton – pictured (above) with Hitachi’s maintenance and facilities manager Chris Evans – said: “This is another significant deal for Beaumont and naturally we’re absolutely delighted to be working with one of Aycliffe Business Park’s flagship companies.

“It comes off the back of a number of notable contract wins for us so business is good for us right now – we’re certainly heading in the right direction.

“Our workforce is growing as we pick up these contracts, we’ve created a small number of jobs for local people as we grow and we’re looking to continue that this year.”

He added: “We’re looking to continue the growth path that we’re on while maintaining the family values that we offer.

“This is the culmination of many months and years’ hard work and endeavour to gain accreditation which will enable us to push us into new fields and win new large-scale tenders to support our ambitious growth plan.

Beaumont’s latest deal is another example of Hitachi’s policy to utilise the local supply chain as much as possible.

The firm’s maintenance and facilities manager Chris Evans said: “We’re delighted to be working with Beaumont, who are now in charge of the upkeep of grass, trees, shrubs, weeding and anything that just keeps the site looking world class.

“We’re keen to promote the Hitachi effect locally, and use as many local companies as we can because that brings obvious benefits to the local community, and it expands our footprint in the region.”

Earlier this year, Beaumont reported a 20% hike in turnover to £625,000 figures after the firm had enjoyed a 36% hike on the previous year.

Beaumont was established in 1965 by Steven Lineton, who ran the new business alongside his garden centre based on Beaumont Hill in Darlington. In 1991 Beaumont moved premises to larger premises on Aycliffe Business Park and has since pushed more into the commercial maintenance sector.