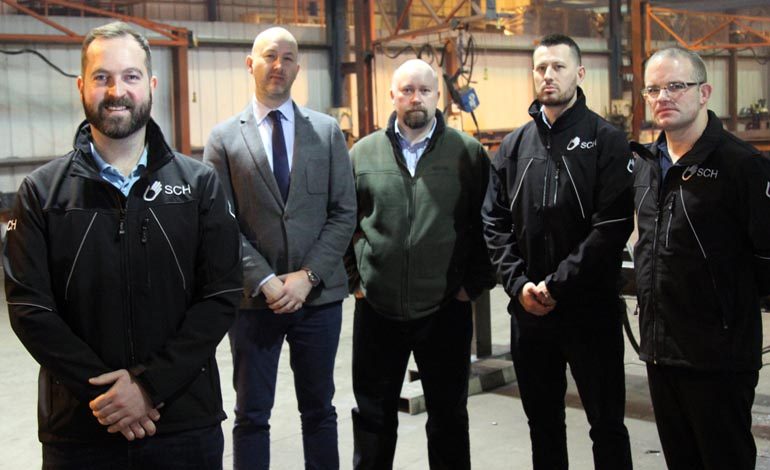 A thriving fabrication firm has boosted staff numbers after winning a raft of new contracts.

It comes after the Aycliffe firm won a number of new contracts, including three with leading national main contractor Sir Robert McAlpine.

SCH is working with McAlpine on projects at the Gates shopping centre in Durham, the Durham branch of City Electrical Factors in Meadowfield and the Student Union buildings at Leeds University.

As a result, SCH has brought in Mark Reynolds as technical manager, Mike Dowson as trainee estimator, Brett Hartland as draughtsman and Steven Dykes as trainee draughtsman – all of which are new appointments.

In addition, SCH has added one new painter, a new machine operator and a new plater/welder to its fabrication team as well as two erectors and one foreman to its site team.

The firm’s managing director Gary Finley says although he’s still concerned about a skills shortage, and is still looking for good skilled staff, he’s happy with his recent recruitment boost.

“We’re delighted with our recent additions to the team after trying very hard for a long time to get our numbers up,” said Finley.

“We experienced a slight dip in the middle of 2016 when, at our lowest point, we dropped to around 35, but now we’re up to the biggest number of employees we’ve had since the company was formed 10 years ago.

“The skills shortage remains very much a concern and we’re continually looking for skilled staff, both on site and in our fabrication team, but we’re certainly happy with the team we have together at the moment and we’re hopeful 2017 is going to be a positive year for us.”

Finley says SCH was buoyed by a number of new enquiries towards the back end of 2016, as well as notable contract wins.

SCH is working with Sir Robert McAlpine on enabling works at the Gates shopping centre in Durham city, involving concrete drilling and installing steelwork, while in a separate contract the firm is also working on behalf of sister company Finley Structures at the Gates, managing the site and steel erection.

SCH is also working on a project at City Electrical Factors in Meadowfield, Durham, involving 75 tonnes of secondary steelwork which has to be erected on to a pre-cast concrete structure, as well as a refurbishment project at Leeds University, involving various packages in and around the Student Union building.

Finley added: “It has been a very encouraging, busy period, especially for this time of the year.

“A lot of enquiries are coming in and a lot of jobs are being priced in the North-East, which is a positive sign.

“But more projects are being awarded to SCH because of our ability to deliver complex projects – getting steel into awkward places and in and around existing buildings – and we’re confident we’ll continue to win a lot more of these as we head into a new year.”