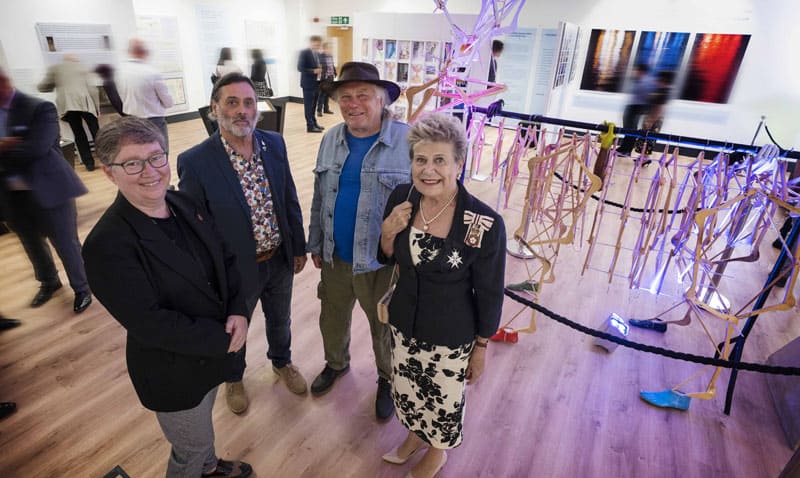 A free exhibition featuring artwork from veterans and the Armed Forces community officially opened to the public at the weekend.

Visitors to Through Soldiers’ Eyes, at Bishop Auckland Town Hall, can now explore historical pieces from the DLI Collection alongside artwork, photography, sculptures and oral, visual and written work from service men, women and their families, many of them from County Durham.

Durham County Council’s community arts team has worked with over 100 members of the Armed Forces community over the previous 10 months, using art and creativity to support their mental health and wellbeing.

The exhibition, which runs until Saturday November 20, will take audiences on a journey from the First World War to present day life in the Armed Forces in times of peace, conflict, repatriation and rehabilitation.

Offering a snapshot into the personal experiences of those serving, as well as the families left at home, it aims to challenges visitors as to how they think about the Armed Forces and raise awareness of veterans and service personnel in the community.

A documentary film, commissioned as part of the project, can also be seen during the exhibition.

Also available online, the film shows creative aspects of the project as well as offering a moving and humbling insight into the lives of veterans and their families.

The exhibition was officially opened by Sue Snowdon, Lord-Lieutenant of County Durham.

Mrs Snowdon said: “It is an honour to have been able to open such a fantastic exhibition here at Bishop Auckland Town Hall.

“It is wonderful that so many veterans, forces personnel and family members have been involved in Through Soldiers’ Eyes. It offers us a poignant insight into their lives through a range of differing experiences and I would like to pay tribute to everyone involved in making this happen.”

Alongside the exhibition, visitors can also take part in an interactive digital experience, from Saturday 23 October, to explore life on the Western Front through the eyes of DLI soldiers.

Other activity includes theatre performances for primary school pupils to explore the theme of Remembrance, while activities and talks are also being held with some of the artists involved in the project.