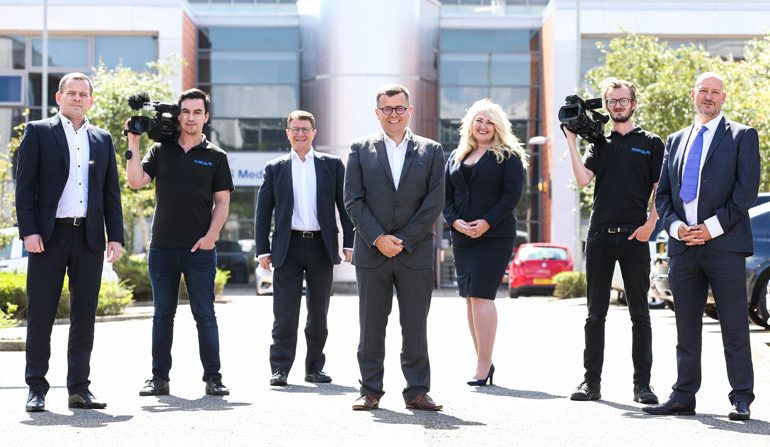 Aycliffe Business’s sister publication, Tees Business, celebrated the launch of the Tees Tech Awards in August – with the virtual event being streamed as live on YouTube.

Thousands of people tuned into the inaugural event, which was designed to champion the Tees Valley’s tech and digital sector.

It was organised by Resolution Media and Publishing – the team behind Tees Business – and Aycliffe Business editor Martin Walker, with his business partner Dave Allan, in association with DigitalCity and Middlesbrough Digital.

More than 90 entries were sent in across 11 different categories, and the event was due to be held at Wynyard Hall in April.

But due to Covid restrictions, the organisers had to take the event online – with Darlington-based Recognition PR helping them to film and stream it on YouTube, using shortlist videos produced by Middlesbrough firm Wander Films.

The show was hosted by former BBC Tees presenter John Foster, with the shortlisted candidates for each category dialling in via Zoom as each award sponsor revealed the winners.

As part of the event, 150 goodie bags were sent to “guests”, including a glass of prosecco (the welcome drink), a small bottle of wine, chocolates and an official programme.

Trophies, designed by Middlesbrough firm Crystal Galleries, are being handed over in a series of socially distanced private presentations.

Martin Walker said: “We re-wrote and ripped up the script for the Tees Tech Awards a number of times – it was a huge challenge as guidelines around public gatherings changed.

“But it was appropriate that technology saved the Tees Tech Awards, as we used online tech and Recognition PR’s fantastic media facilities to deliver them.

“It was important the awards went ahead in whatever format. We created them to celebrate a thriving sector, with more than 90 businesses taking the time to enter, so we were committed to delivering them.”

“It was a resounding success. The live stream had around 800 views on YouTube, but many businesses arranged their own socially-distanced gatherings, so we estimate the number of people who watched it live to be around 2,000.

“We were delighted with both the event itself, and the positive reaction from the business community.”

Recognition PR managing director Graham Robb added: “We were delighted to be involved in this project.

“Cocid-19 presented a number of logistical problems which everyone was determined to overcome. The result was a virtual awards ceremony, watched by many more people than would have attended in person.

“We have invested in a functional TV studio in order to generate content for clients during the pandemic – it was put to great use in delivering these awards.”

Full details of the awards and reaction is at teesbusiness.co.uk.