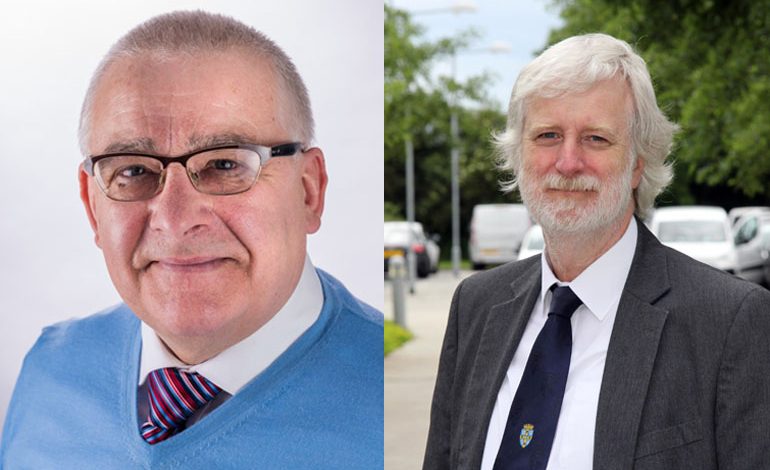 Labour Party councillors have thanked voters for electing them to Durham County Council.

But the local election was tinged with disappointment after two loyal and hard-working candidates lost their seats in shock results.

Councillors Joan Gray and Mike Dixon lost out to Tory candidates Scott Durham and Paul Howell in the Aycliffe North and Middridge ward.

But John Clare (above, right), Eddy Adam, Sarah Iveson and Kate Hopper all held their respective seats during the closely-fought election.

And Aycliffe Town Councillor Jim Atkinson (above, left) won the most number of seats in the Aycliffe East ward to become a county councillor for the first time.

Cllr Atkinson said: “Many thanks to ‘team Jimiack’ for the support and help you gave me that kept me sane through a difficult campaign.

“My brother Phil was my campaign manager and deserves a massive thank you for the educated steerage. There are other names who were massive in my success and I will thank them personally.

“The hard work done in the past by the Labour Party and dyed in the wool socialist voters was also a major contributor to the result.

“I will sideline my natural humility now to revel a little in the euphoria with a few days to relax before getting back into the serious business of Great Aycliffe and those who make it great.”

Meanwhile, the two newly-elected Tory councillors – who both don’t live in Aycliffe – also thanked the electorate for sweeping them to victory.

In a statement, they said: “As your newly-elected Conservative councillors we would like to thank the people of Aycliffe North and Middridge for placing their trust in us.

“As new councillors we have to go through an induction process at County Hall over the next few weeks but as soon as we are through this we will be working on your behalf.

“Our intention is to work with other councillors where we agree with them but to provide robust challenge where we (or you) don’t.”

The Aycliffe wards of the Durham County Council election results in full: