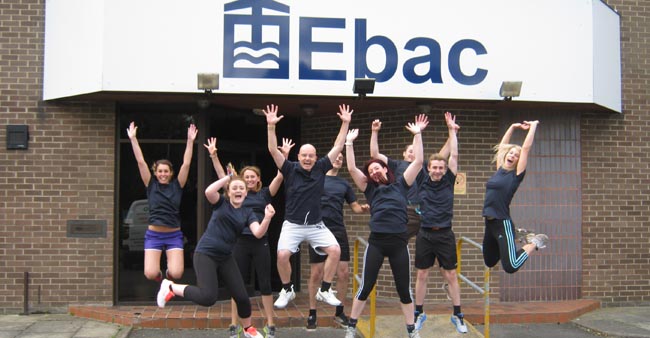 A team from Newton Aycliffe manufacturer Ebac had to have their own dehumidifiers on hand after a Sunday soaking!

Ten brave workers from the Aycliffe factory competed alongside around 1,000 other fundraisers in the Stockton River Rat Race at the weekend.

The five women and five men from Ebac, Europe’s leading manufacturer of bottled watercoolers and domestic dehumidifiers, were raising money for a cause very close to their hearts.

The Olivia Mae Foundation helps cover the costs faced by families who have to travel daily to hospital to see their sick children.

It was set up by Ebac MD Pamela Petty and her husband Richard in memory of their baby daughter Olivia Mae, who died aged nine weeks, at the Freeman Hospital in Newcastle.

Team leader Joanne Vipond said: “I decided that 2014 had to be the start of many challenges we would put ourselves through in order to raise as much money as possible for a fantastic cause, The Olivia Mae Foundation.

“I’ve been holding training sessions twice a week for the past 10 weeks in an attempt to get everyone into shape. It’s also been a great opportunity to spend some time together outside of work.

“If anyone would like to support us they can donate at: www.totalgiving.co.uk/mypage/oliviamaeratrace2014”

On Sunday, the team were hoping to be Rat Race heroes after tackling a 10km obstacle course based in and around the Tees.