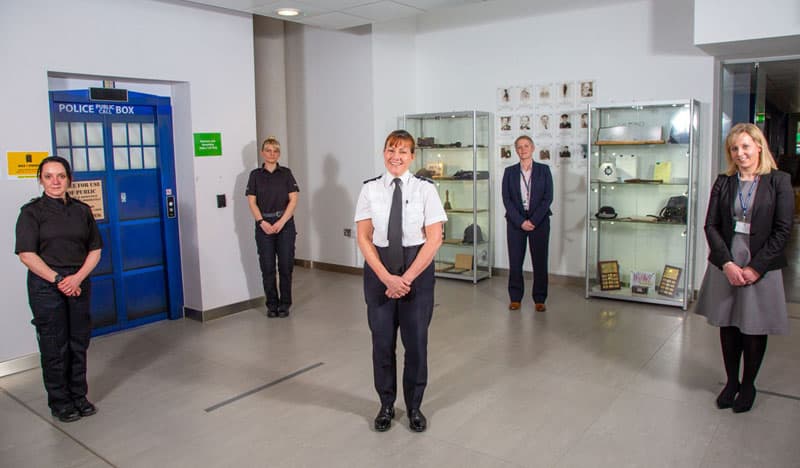 Four police officers who have earned their stripes as Durham’s newest sergeants have been congratulated by chief constable Jo Farrell.

A total of 22 officers passed the force’s rigorous February promotion boards and, on this occasion, ten of the successful candidates were women.

Four of the newly-appointed sergeants joined Jo at the force’s headquarters in Aykley Heads on International Women’s Day (March 8) – a global day celebrating the social, economic, cultural, and political achievements of women.

The chief constable met with some of the new sergeants for an informal and socially-distanced ceremony to congratulate them on their achievements.

Among those attending the ceremony were Alex Gibson and Wendy Bake, who are both response sergeants, Sarah Hindmarsh, from crime and justice command and Kezi Smith, who works in safeguarding.

Jo, who in 2019 was appointed the first female chief constable in Durham Constabulary’s 180-year history, said: “I would like to congratulate our new sergeants on their promotions: each of them has demonstrated incredible dedication and ability to reach this milestone in their careers and I hope they go on to have a long and successful career in policing.

“But it is particularly pleasing that on International Women’s Day we see so many female officers in this new cohort.

“Inclusion is at the core of this organisation and I am committed to ensuring that all our officers and staff should be treated fairly and equally and that there should be no unfair barriers to promotion.

“The success of these officers reflects that ambition.

“We have come a long way since I joined up as a constable in the early 1990s, when policing was very much a male-dominated world, but we still have progress to make.

“Ultimately, we are working towards the day when our communities are policed by a constabulary which reflects them.”

More than 1200 women work for Durham Constabulary, approximately 34% of the entire workforce, including 420 police officers and 76 PCSOs.

The percentage of women who have achieved sergeant, inspector and chief inspector rank at Durham Constabulary is already higher than the national average for police forces.

Earlier this year, the force was named in a list of the Top 50 most inclusive employers in the UK.