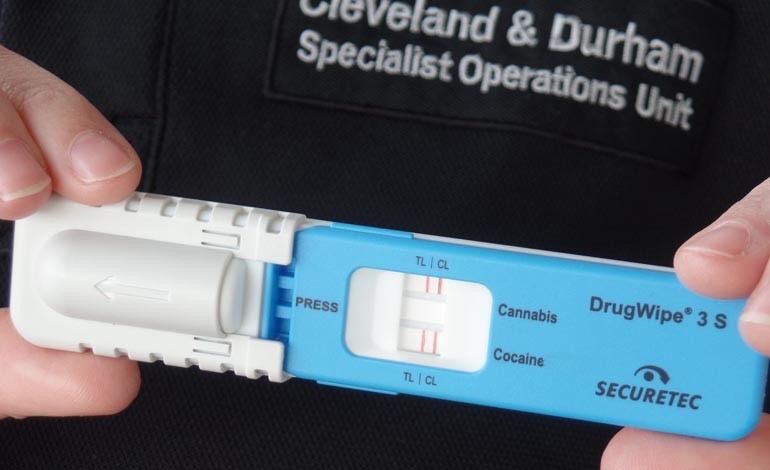 As the national Christmas drink-drive campaign gets under way today, police in Durham and Cleveland are warning motorists they can be tested at the roadside for drugs as well as alcohol.

In March this year new legislation allowed police to use a ‘Drugwipe’ kit to take a mouth swab and test any driver they suspect to be impaired through the use of cocaine and cannabis.

If the sample gives a positive reading they can be arrested there and then, with a further reading then taken at an independent laboratory.

Since the introduction of the new legislation officers across Cleveland and Durham have arrested 136 drivers after they gave a positive reading.

“This is the first Christmas campaign since the introduction of the new drug testing equipment, and the figures suggest it is a serious problem,” said Chief Inspector Mick Robson, from the joint Cleveland and Durham Specialist Operations Unit (CDSOU).

“Drugs can stay in your system a long time and if you are caught, the consequences can be huge.”

The new law sets limits at very low levels for a total of 14 substances, including some prescription drugs. However, the limits set for medicines exceed the normal prescribed doses.

Motorists convicted of drug-driving will be banned for at least a year and can be fined up to £5,000 and be sent to prison. The penalty for causing death by dangerous driving under the influence of drugs is up to 14 years in jail.

Thanks to the change in the law, police do not have to prove a motorist is unfit to drive, only that they have an illegal level of drugs in their system while driving.

“If you have consumed any substance which affects your ability to drive you are putting yourself, any passengers and other road-users at a massively increased risk,” added Chief Insp. Robson.

“Throughout the month the CDSOU will be staging regular roadside checkpoints and will arrest anyone found to be unfit to drive. Testing is also routinely done following any collision, even if no-one has been hurt.

“As we head into the festive season we want people to enjoy themselves but to stay safe. And that means if you are heading out onto the roads, don’t be tempted to have anything which will affect your ability to handle a vehicle.”

Across both force areas across the three years from 1st January 2012 to 31st December last year, there were 21 fatalities, 69 people seriously injured and 422 slightly injured as a result of road traffic collisions involving a drink or drug impaired driver.

Durham’s Police and Crime Commissioner Ron Hogg said: “Driving whilst under the influence of drink or drugs puts lives in danger, not only the driver’s, but those of other road users and pedestrians. Be responsible and always make alternative plans to get home safely.”