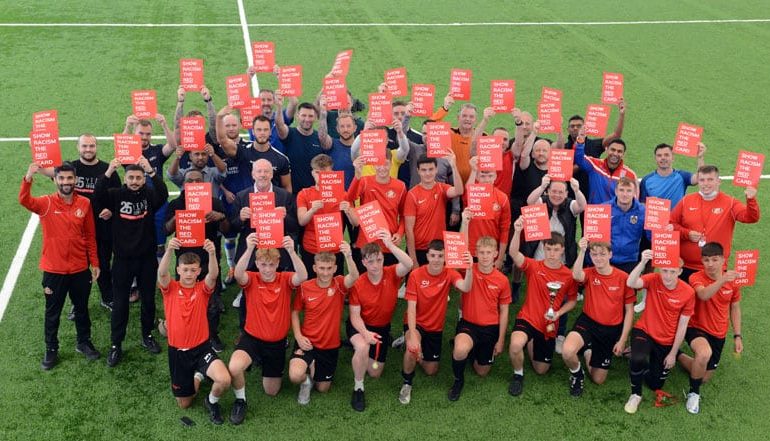 Officers were put through their paces yesterday by aspiring footballers as they took part in the first five-a-side tournament for South Asian Heritage Month.

Team Durham was made up of PCs Andy Davison, Dan Lake, Keith James, Sgt Pete Tate, DS Sarah Douglas, Sgt Waheed Mughal and Foundation of Light goalie Louis Pye who gave it their all in the day aimed at raising awareness of South Asian Heritage Month.

The event was organised in partnership with the Foundation of Light and Northumbria Police, who also entered teams into the tournament which was held at the Beacon of Light community hub in Sunderland.

Five teams battled it out for the cup with the Foundation of Light Scholars taking the title and being presented with their medals by former Sunderland United captain Kevin Ball.

Representatives from the charity Show Racism the Red Card also gave a workshop and following the matches, participants put their cookery skills to the test with a South Asian-inspired cookery session.

The event was part of national South Asian Heritage Month which celebrates the South Asian community by showcasing British South Asian History in the UK through arts, education and sport.

Sgt Shaz Sadiq, who organised the day in his role as the Durham Constabulary’s Positive Action Lead, said: “It’s great to see colleagues coming along to support events like these and raising awareness through the power of sport.”

PC John Boddy, of Northumbria Police, added: “We were delighted to take part in this event and celebrate the South Asian community we have here in our region.

“Sport is a great way to bring people together and promote equality, diversity and inclusivity in our organisation and across the North East as a whole.”

Michael Colclough, Foundation of Light’s head of informal education said: “Thanks to Durham FA, Durham Police, Northumbria Police and Show Racism the Red Card, we’re able to offer an inclusive, enjoyable experience, with the aim of educating participants around the positive impact the South Asian Community has had on food, clothes, music and so much more.

“The day shared the experiences of what makes up British South Asian identity, in what is such a diverse and inclusive nation.”