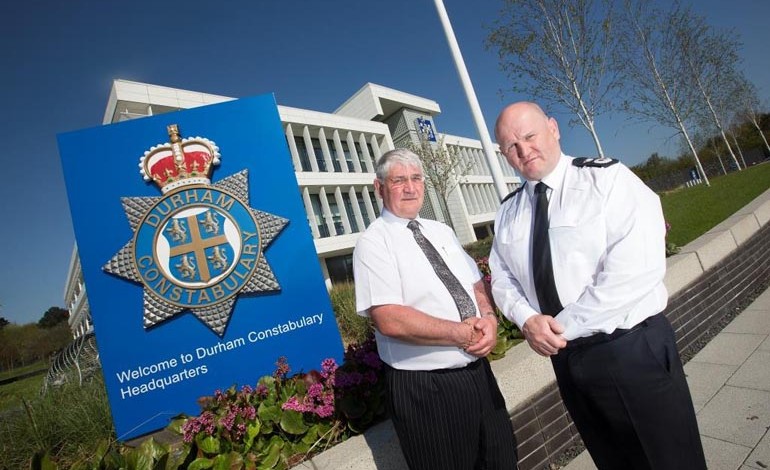 Durham Constabulary has been graded as outstanding across all areas of efficiency for the third year running.

Her Majesty’s Inspectorate of Constabulary (HMIC) has today published the latest findings for police efficiency, which is part of the annual PEEL programme of inspections (police effectiveness, efficiency and legitimacy) and looks at how efficient forces are at keeping people safe and reducing crime.

The efficiency inspection was broken down into three areas – how the force understands the demands for its services; how it uses resources, and planning for the future.

Durham Constabulary was graded ‘outstanding’ – the highest grade – in each area.

Only two forces from 43 across England and Wales received an overall grading of ‘outstanding’ – Durham and Thames Valley.

The HMIC report said: “The force has extensive and creative plans in place to meet a variety of future scenarios of demand and budget and is well-placed to meet any future circumstances.”

It added: “Durham Constabulary has an excellent understanding of the demand for its services, both now and looking ahead to changing crime patterns.

“The senior leadership team promotes a culture where officers and staff of all ranks are encouraged to offer their views and senior leaders regularly go out on patrol with more junior officers. It has carried out detailed analysis of the skills of its workforce and leadership capability and revises these plans regularly.

“Durham Constabulary is to be congratulated on its consistently high level of achievement in their financial planning.”

Durham Constabulary currently holds an ‘outstanding’ grade for being effective (keeping people safe and reducing crime) and a ‘good’ grade for legitimacy, making it one of the top performing forces in the country.

Chief Constable Mike Barton said: “The acid test of any organisation, especially public funded organisations, is how wisely they spend their money.

“The public of County Durham and Darlington should be reassured that Durham Constabulary has, for the third year running, been graded as outstanding across all areas of efficiency.

“What this means is we understand our demand, we use our resources well and we plan for the future in an outstanding way.

“The report makes satisfying reading and shows we work well with outside organisations and the public.”

The report praised Durham’s culture of inclusivity and said the force has ‘an outstanding approach to seeking new ideas from its workforce’. In particular, it praised the 100 Little Things initiative which encourages staff to submit suggestions for improvements covering anything from the type of pen issued to officers, to new policies and working patterns.

Mr Barton added: “We constantly look to innovate and implement new ideas, and the 100 Little Things initiative is a prime example of this. However, clearly someone cannot count as we have completely excelled our target – we now have 140 Little Things!”

Police, Crime and Victims’ Commissioner, Ron Hogg, said: “This is yet another feather in the cap for Durham Constabulary.

“It is a rare recognition for a force to be so consistently awarded the high grades which the officers and staff have received. To be one of only two forces in the country is an indication of how challenging it is.

“I offer my heartiest congratulations to everyone associated with Durham Constabulary who has worked so hard to make this possible.”