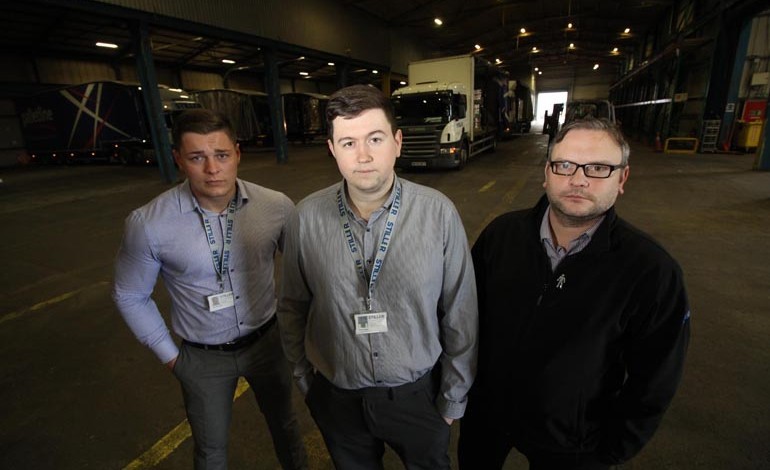 Stiller Warehousing and Distribution has invested heavily in relocating its pallet distribution operation to within its main site on Aycliffe Business Park.

It has also taken on four new forklift drivers and three office employees as part of a restructuring which has enabled it to cope with an increase in demand.

Stiller provides cost-effective warehousing and distribution services to businesses across the North-East and is also a member and major shareholder in Palletline, a national co-operative network of 70 companies.

The Palletline operation had previously been run at an external, leased site about a mile away from Stiller’s main site on Ridgeway.

But after the family-run firm moved its pallet storage facility into its new state-of-the-art warehouse – a 40,000 sq ft 5,000-pallet facility which increased Stiller’s warehousing capacity by nearly 50% – in September, it has created room to relocate its Palletline operation.

• Stiller’s new recruits Josh McCartin (left) and Steven Stones (right) with former apprentice Ryan Baiey, who has been promoted to shift supervisor as part of the firm’s reorganisation.

A total of more than £1.1m has been invested in the new warehouse and relocation of its pallet distribution operation.

It has enabled Stiller to consolidate its two main operations into its head office site which has increased efficiency and improved communication.

“It has given us more room to grow and meet demand.” said the firm’s Commercial Manager Matthew Stiller.

“It also keeps the distribution operation under the one roof which has improved communication and has also helped us to speed up the Palletline operation, which is effectively a point in which goods are moved between large and small vehicles.

“Then between 3pm and 6pm they bring customer’s good back, they’re sorted again on to the trunking vehicles and sent out to multiple destinations across the UK overnight. It’s basically just like the Royal Mail operation for large bulk items.”

Meanwhile, former business admin apprentice Ryan Bailey, 22, who has been with Stiller for more than three years, has been promoted from transport operator to shift supervisor.

Stiller’s head of pallet distribution Chris Bain said: “The relocation has consolidated the two separate sites into one which has massively improved communication.

“But the biggest single advantage is the way in which we get the vehicles in and out of our bays.
Previously the vehicles would have to reverse into position, which meant our vehicles were having to make about 100 reversing manoeuvres a day.

“It used to take about 35 to 40 minutes for the trucks to come in and off-load, and drivers would often get stuck in a queue, but now we have a one door in, one door out operation which has halved the amount of time it takes for the drivers to get in and off-load.

“At our former site we had nearly reached our capacity, but relocating has given us more space, we’ve allowed ourselves to grow and to recruit new drivers to meet the demands.”