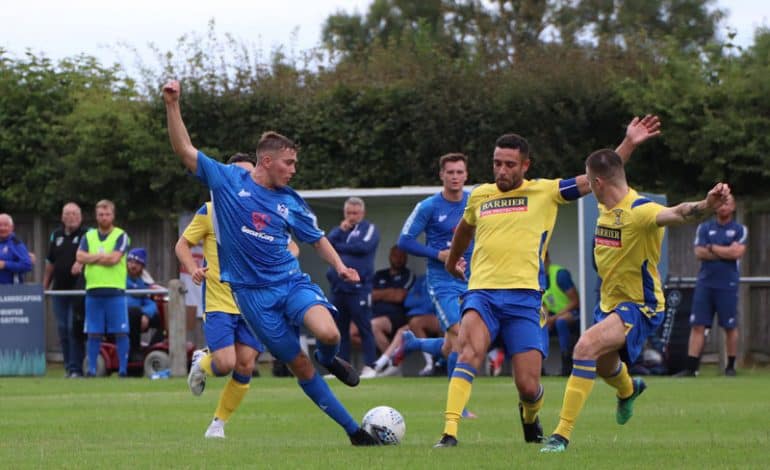 Newton Aycliffe got their Northern League season off a flying start with a home win at the weekend.

As manager Brian Atkinson took charge of his first opening day fixture, ex-Aycliffe boss Colin Stromsoy brought his Newcastle Benfield side to the SecuriCorp Stadium at Moore Lane on Saturday.

The start of the day took more organising than usual. Of course, there was the normal last minute dashing around that goes on to make sure everything is ready ahead of the start of a new season, but this season it also included the job of marshalling players towards the correct changing room.

Our visitors from north of the Tyne have no less than seven players who had previously worn the blue of Newton Aycliffe registered for the coming season.

There was a couple of confused faces but everyone made it to the right changing room eventually and we were ready for the start of the new season.

Onto matters on the pitch and as the sun threatened to show its face just before kick-off the teams were announced, Benfield listed five ex-Newtonians in their line-up, while Aycliffe had two teenagers on the bench, but more of that later.

The game got off to a flying start with the home side taking the lead in the fifth minute through an outstanding finish from the returning Jamie Owens whose curling effort beat two defenders and the keeper before finding the bottom left corner.

Aycliffe had the lead and the bulk of the pressure for the first quarter of the game, with Grainger saving well to keep the score at 1-0 inside the first 10 minutes.

Benfield did get a foothold in the game following two lengthy injury stoppages which disrupted Aycliffe’s flow, with Gez Richardson having a decent chance before Ben Dibb-Fuller broke clear of the back line but his shot couldn’t beat Adam McHugh who got down well to smother the ball.

Our visitors started the second period in the same fashion as Aycliffe did in the first and saw two good strikes both miss the target by millimetres with McHugh beaten.

At around the hour mark, the skies opened and the rain came lashing down, the wet surface appeared to hamper Aycliffe’s usually faultless flowing passing and allowed the visitors more of the possession, and with that the more chances.

However, football being the game that it is, just as the visitors pressure was building the second goal of the game came and it was Aycliffe who doubled their lead in the 76th minute.

Some fine build up play along the right saw some pin-point passing with Costello and Wood involved before Callum Munro slid his pass across the edge of the area to Jack Clarkson, one of the home-grown teenagers who had come off the bench to replace Ben Reay, and he took his goal with the coolness of a player twice his age as he turned the ball goalwards, again finding the bottom corner out of the reach of the helpless Grainger.

The joy on the 17-year-old Newtonian’s face, as he was mobbed by his teammates, is a sight we hope to see many more times over coming years at Moore Lane as the link between the Newton Aycliffe first team and its junior sections continue to go from strength to strength.

Benfield, to their credit, didn’t stop playing despite trailing by two with under 15 minutes left to go, and they pulled a goal back just three minutes later with the third outstanding goal of the game.

Ryan McGorrigan unleashed an unstoppable strike with the outside of his right boot which flashed past McHugh, who was at full stretch, and smashed into the roof of the net. Those in attendance were promised drama for the whole 90 minutes.

Moments later Aycliffe had an attack down the right broken down by a trip on the edge of the Benfield box.

An easy call for the referee and his assistant but the visitors appeared to feel hard done by and, in the midst of their protests, Aiden Haley threw the ball into the back of Jamie Owens head in plain sight of everyone inside the ground, including the referee Kevin McKitterick who stood firm against the irate Benfield team who surrounded him at this point and brandished his yellow card to Haley, which was for the second time of the afternoon and so followed it up with his red.

Six minutes to go with 11v10 and still the game wasn’t settled.

As tensions were boiling, Atkinson sent on 16-year-old Charlie Dawson, another Newton Aycliffe junior side graduate who was on for his Northern League debut for his hometown club, and what a time to make it.

But, as the old adage goes, if you’re good enough you’re old enough – and Charlie proved to be just that, as the tension could have given him reason to hide, he stood alongside his teammates and handled the atmosphere with ease.

Still the game wasn’t over, as twice in quick succession McHugh had to tip strikes around the post as well as making a fantastic point-blank stop from efforts which looked certain Benfield goals and then a further two goal line clearances in added time from the Aycliffe defence were needed to keep out strikes from Eddie Thomas and Kyle Errington right at the death.

The final whistle did eventually go and Aycliffe’s campaign started with three points and it was handshakes all round between the former teammates from both sides.

The Cobblers Hall Man of the Match, in association with Marston’s Pubs, was skipper Aaron Brown

Aycliffe now turn their attention to the Emirates FA Cup with a trip to Ashington on Saturday (August 6).