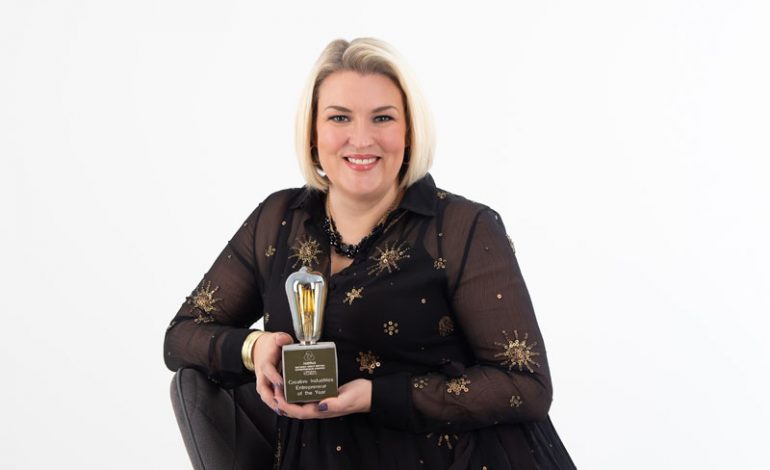 The entrepreneur launched craft retailer, Crafter’s Companion, 14 years ago. In that time, Sara has grown the business to a team of 200 and the company sells its products to more than 40 countries around the world.

It rounded off a successful night for Sara, who was also named Creative Industries Entrepreneur of the Year.

Now in its 17th year, the NatWest Great British Entrepreneur Awards celebrate the hard work and inspiring stories of entrepreneurs, rather than the business’ balance sheet. It is the first time the Awards have held a dedicated regional final in the North East

“It is so important to celebrate the wealth of entrepreneurial talent that we have in the region and there were so many worthy winners in the room.

“I am truly grateful to have received the award and look forward to representing the North East at the national finals in London.”

“It’s the first time we’ve held a final for the North East as its own region, and it has been fantastic to see the quality of entrepreneurs in the area.

“I want to congratulate all of our winners in North East and wish them the very best of luck for the National Final in November. With over 3,000 entries this year across the UK, it really is a great achievement in itself to get to the regional final.”

Gordon Merrylees, managing director of entrepreneurship at NatWest, said: “NatWest is proud to support the Great British Entrepreneur Awards celebrating another year of amazing achievements for entrepreneurs starting and growing businesses from every corner of the country.

“Supporting entrepreneurs is a key priority for NatWest and our dedicated programme of fully funded accelerator hubs, mentoring, insight and bespoke coaching, is specifically designed to meet the needs of entrepreneurs who want to start, scale and succeed in business.

“Congratulations to all of the winners and to those who were shortlisted for one of these prestigious awards.”

The winners of each category will now go to the National Final of the NatWest Great British Entrepreneur Awards, which takes place in London in November.