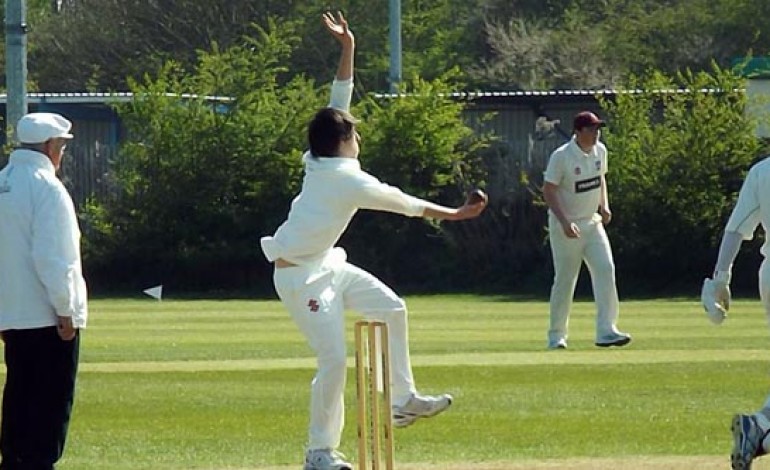 Both of Newton Aycliffe’s cricket teams earned draws in a rain-affected day’s play at the weekend.

A three-hour stoppage for persistent rain ruined a game that Aycliffe’s first team may well have won, as they had to settle for a share of the spoils at home to Wolviston in the NYSD Division Two.

The visitors scored 137 for seven with Aycliffe bowler John Cavanagh (sponsored by CVO Fire) again getting the man-of-the-match award after his 13-over spell gave him the superb figures of three for 21.

Aycliffe managed 65 for four from 12 overs, with Michael Howe scoring 31.

Aycliffe’s second team also played out a draw away to Wolviston’s second string.

Their opponents racked up an impressive 265 all out, with 16-year-old leg spin bowler Patrick Howe (pictured above) taking a career-best six wickets for 46 and the man-of-the-match award. Tom Wickins also took three for 66.

Aycliffe were on 106 for six before they ran out of time due to the weather. Neil Bancroft was 19 not out while Adam Gittins scored 19 and John Wardle 13.

Aycliffe’s first team are at home to Hartlepool’s second XI at Aycliffe Sports Club this Saturday (1pm), while the second team go to Northallerton (also 1pm) in the NYSD Division Three on Saturday.

There are also fixtures due to be played on Bank Holiday Monday (4th May, both 1pm), with he first team going to Stokesley and the second team at home to Blackhall.