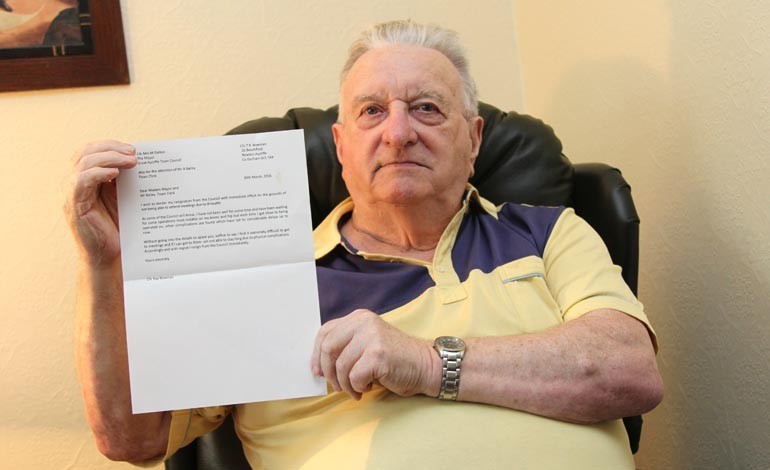 An ex-councillor has accused a former colleague of harassment and forcing him to resign.

Former Great Aycliffe Town councillor Ray Bowman says Arun Chandran – who is being investigated by his own Labour Party amid allegations he tried to manipulate the outcome of the West ward by-election – bullied him into stepping down.

Mr Bowman says Cllr Chandran even drafted up a resignation letter (pictured above) on his behalf and handed it into Aycliffe Council, despite claiming he had changed his mind and asked him not to submit the letter.

The former councillor claims Cllr Chandran visited him on the pretense he was concerned for his welfare, but after submitting the letter to the council he hasn’t visited him again since.

Mr Bowman told Aycliffe Today: “Councillor Chandran has continually bullied and harassed me, visiting my home frequently at various times, often waking me up, asking me to resign from the Town Council for several months.

“His reason for bullying me to resign was he said that it was unfair to the residents that I was unable to attend meetings or work in the community.

“On the last occasion I was so sick and fed up of his continuous visits that in my fury and helplessness against his continuous bombardment of lectures and of visits I signed the letter that he brought,” he added.

“On his visits to my home he discussed often the plans HE would put into place that should an election be called for – such as putting the blame for the cost of the election on whoever calls for it, and asking a member of either the Liberal Democrats or UKIP to stand to split the votes if an Independent candidate stands.

“Considering he was supposed to be thinking of my health he has never visited me again.”

Mr Bowman added: “I don’t know what his motives were, but clearly he and one of his pals are trying to engineer their way into taking control of the council. He’s a dangerous man.”

Great Aycliffe Town Council confirmed it had received Mr Bowman’s resignation on 30th March, but couldn’t confirm whether it was handed in by Mr Bowman himself.

Cllr Chandran told us he didn’t want to respond to the claims, but said: “I consider Ray Bowman to be a kind, generous and decent man, but I will not be responding especially when I know where this really comes.”