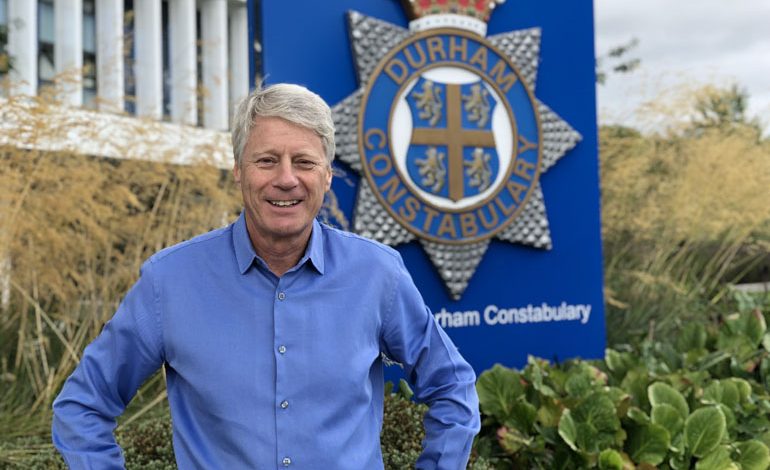 Television presenter Nick Ross, who for 23 years was the face of popular BBC show Crimewatch, commended the force’s approach to tackling crime during two talks to officers, detectives and staff at their HQ in Aykley Heads.

Nick is an acknowledged expert in policing and is the founder of the Jill Dando Institute of Crime Science at University College London, in honour of his Crimewatch co-presenter Jill Dando, who was killed in 1999.

He is also author of the book “Crime: How to solve it – and why so much of what we’re told is wrong” which urges a radical rethink of crime policy.

During his visit, Nick discussed cuts in police resources versus the growing evidential burdens imposed by the criminal justice system; the distortions created by official statistics; the bias in criminal intelligence caused by the focus on prosecution rather than prevention and the need to solve problems rather than make arrests.

Nick said: “I came to Durham on the advice of the Home Office: they said I really ought to meet the chief here and see what they are doing.

“I knew that Durham was excellent; and had been judged the outstanding force by HMICFRS. I thought that what they regarded as excellent was not necessarily what I would think the police ought to be doing, but I am hugely impressed.

“Durham are way out ahead of what almost any other force is doing in so many different ways.

“Above all is the idea here in Durham that police have got to problem solve.

“The public sees the police’s job being to catch people and solve yesterday’s crimes, but that’s not how it’s seen here at all, it’s more about reducing the number of future offenders.

“In Durham, problem orientated policing is like writing through candy rock, it’s absolutely part and parcel of what happens here and it’s very impressive.”

The approach means police have to be proactive in identifying problems which can be targeted to reduce crime and disorder at their roots, working with partner organisations to address issues of concern.

Chief Constable Mike Barton of Durham Constabulary said: “I wholeheartedly agree with Nick that we need all need to think differently.

“I loved his insights into challenging received wisdom. He asks critical questions: the same questions we ask all of our staff to ask themselves.”

Durham Constabulary’s ninth annual problem-oriented policing (POP) conference will be held on October 9 where officers and staff in the force will showcase problem-solving solutions they are carrying out in their area.

Last year’s winner was Community Peer Mentor Coordinator, Jim Cunningham, and PCSO Andy Raby, who took home the title for their project “Nightmare Neighbour Next Door” to deal with a Darlington couple who were repeatedly causing problems for their neighbours and threatening police.