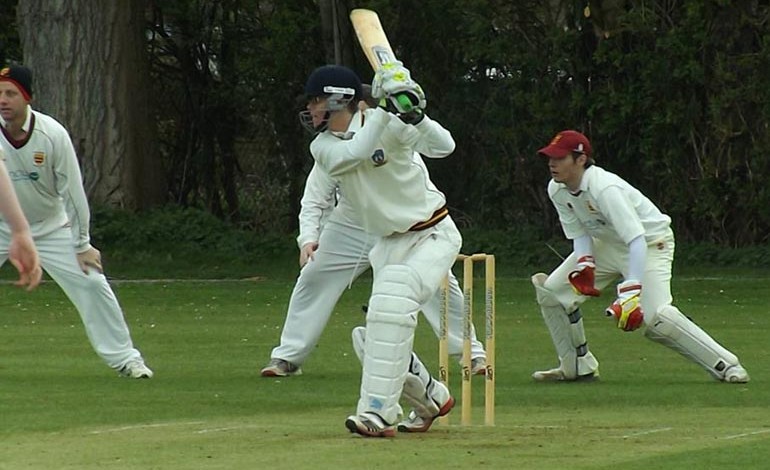 Sam Telford scored an impressive 117 on Bank Holiday Monday as Newton Aycliffe bounced back from defeat at Whitby on Saturday.

Saturday 28th May – NYSD Division 2
Whitby 2nd XI v Newton Aycliffe 1st XI – weather was dry and cloudy. Whitby won the toss and Aycliffe were asked to bat first.
Newton Aycliffe 1st XI 161 all out after 49.1 overs
Mark Woodhead 65 not out, Colin Myers 32 and James Layfield-Carroll 16
Whitby 2nd XI 162 for 6 after 31.5 overs
Michael Howe 5 for 43
Aycliffe’s first team had a disappointing four wicket defeat away at bottom club Whitby 2nd XI. Mark Woodhead (sponsored by Michaela’s Nails) was nominated as man of the match for his superb innings of 64 not out, including seven boundaries and one six. Credit must also go to seam bowler Michael Howe, who took five for 22 for Aycliffe, his best bowling figures for two years.

Bank Holiday Monday 30th May – NYSD Division 2
Newton Aycliffe 1st XI v Marton 2nd XI – weather was dry and cool. Aycliffe won the toss and asked Marton to bat first.
Marton 2nd XI 252 for 9 after 50 overs
Michael Howe 3 for 75 and Mark Woodhead 2 for 36
Newton Aycliffe 1st XI 254 for 2 after 42.4 overs
Sam Telford 117 (pictured above), Ryan Dawson 79 not out and Michael Howe 35 not out
Aycliffe bounced back well from Saturday’s defeat at Whitby to beat Marton 2nd XI at home in an astonishing run chase by eight wickets. Sam Telford (who is sponsored by his mam and dad) was man of the match after hitting his third century for Aycliffe. He reached his hundred off 78 balls and was eventually out for 117 off 91 balls and his memorable innings contained ten boundaries and four huge sixes.
After eight games Aycliffe have won three, drawn one and lost four, and total 93 points and sit in mid table of the NYSD 2nd division.