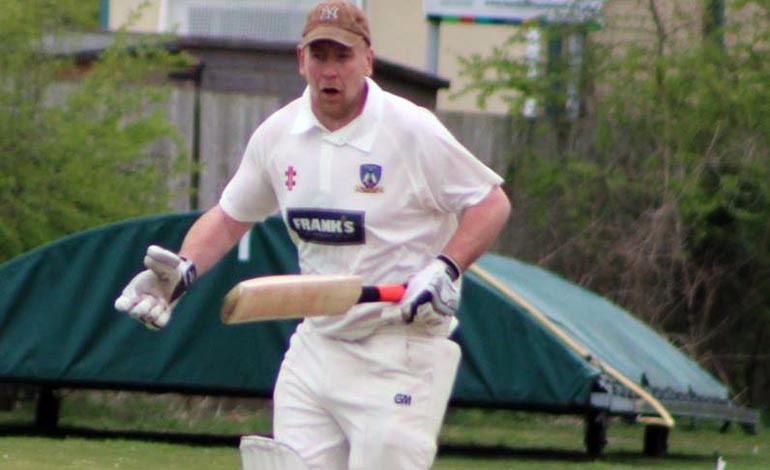 Saturday 12th September – NYSD Division 2
Maltby 1st XI v Newton Aycliffe 1st XI – weather was overcast and showery. Aycliffe won the toss and asked Maltby decided to bat first.
Maltby 1st XI 254 for 9 after 48 overs
Luke Telford 3 for 53 and Michael Howe 2 for 40
Newton Aycliffe 1st XI 255 for 6 after 37.8 overs
John Cavanagh 107, Sam Telford 69 and Chris Palmer 14 not out
Aycliffe set a new club record for their highest score to win a match batting second when they notched up a superb 255 for 6 to win by four wickets away at Maltby. Man of the match John Cavanagh (pictured) scored a brilliant 107, his first century for Aycliffe and his innings included 16 boundaries.
This win for Aycliffe, their fifth on the trot, now gives them 373 points and cements their fifth place position in the table.

Saturday 12th September – NYSD Division 3
Newton Aycliffe 2nd XI v Maltby 2nd XI – weather was overcast and showery. Aycliffe won the toss and asked Maltby to bat first.
Maltby 2nd XI 69 for 5 after 24 overs
Patrick Howe 4 for 13 and Danny Weldon 1 for 15
The match was abandoned after just 24 overs of the first innings due to the weather. Aycliffe were in a very strong position as the visitors were struggling at 69 for 5 thanks to some excellent leg spin bowling from Patrick Howe (sponsored by Aycliffe NUFC Supporters Bus) before the umpires called a halt to proceedings. With only one game remaining this season the second team have already beaten last year’s points total and now have 258 points and sit in 10th place in the table.