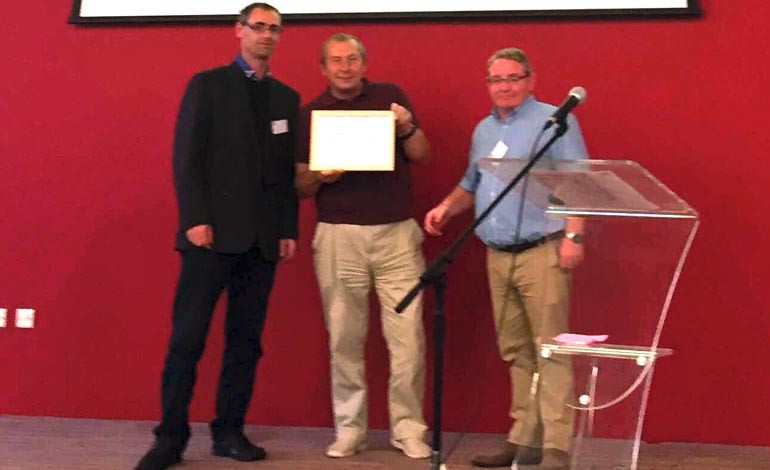 The Cree Men at Greenfield Arts have again received recognition for the valuable contribution they have made to the community.

They were recently invited to be guest speakers at the Suicide Prevention Conference in Durham where they spoke about what Cree means to them and the projects they have engaged in since it was formed.

The Cree group, which is supported by Public Health funding and developed by Greenfield Arts, has encouraged the group of men to explore new activities outside their comfort zone and to think positively about their well-being.

Their achievements have been both wide-ranging and far-reaching – from creating striking sculptures to practical (but elegant) refurbishments, they have produced work of the highest standard with remarkable commitment in a friendly social setting.

The group have been together since 2011 and have grown in numbers and confidence.

Katy Milne, who leads the group with Richard Agar, said: “It is very humbling working with these amazing men.

“They give their time every week and generate such amazing outcomes for others to enjoy. I’m so proud of the many projects they have been involved in and the fantastic pieces they have created.

“One of the highlights on display at the moment are the little free libraries. In particular the delightful palace green library in Durham which is designed to celebrate the cathedral and castle, it’s incredible.”

The awards were presented by Catherine Richardson of Public Health, Durham County Council.

Catherine conveyed the importance and value of Cree in the region and how significant it is in relation to well-being as well as the substantial contribution the groups make to the community.

The ceremony was held at The Durham Centre in Belmont where longstanding members of the Cree group Philip Clark and Daniel Robertson spoke alongside Richard Agar.

Members Eddie Woods and Ken Robson were also in attendance and the group were worthy recipients of the award for their contribution to Cree and Community.

The Cree Men are presently working on the Little Library project, the first two of which have been installed at Greenfield Community College (both at the Aycliffe and Sunnydale site).