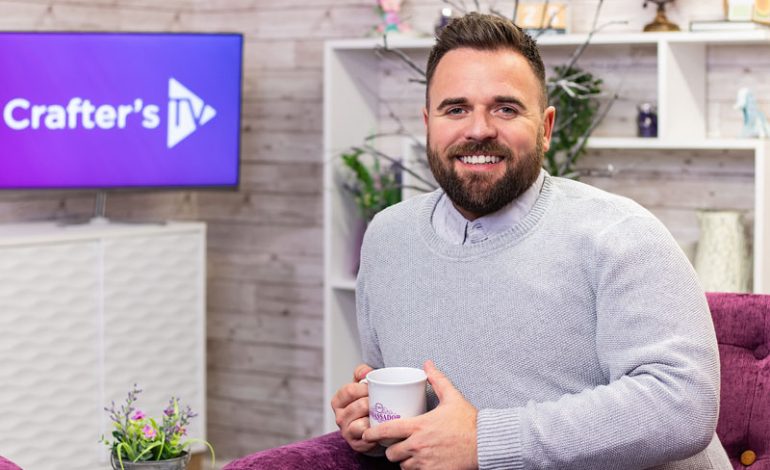 Crafter’s Companion is expanding its in-house TV team with the appointment of its first lead presenter.

In what has become a huge area of expansion for the business and a vital part of its ecommerce strategy, Joe Remblance has joined Crafter’s Companion to host the schedule of shows on the its channel, Crafter’s TV.

Joe’s role will involve guiding his craft expert co-stars and viewers through the programme, driving the social conversation and interacting with the audience live on air.

With nine years’ experience in the TV shopping industry, Joe brings a wealth of expertise to his new position. Prior to this, the presenter worked in the hospitality industry as a chef and general manager, and for his family’s catering company.

In the past 12 months, Crafter’s Companion has invested in an expansion of its studio space, which has included the creation of two studios and a control room.

To support the surge in demand for its TV division, the company has also bolstered its in-house production team, recruiting an online video content producer, a graphics and video editor, an assistant producer and a manager for the TV division, in addition to promoting an existing team member to production manager.

Joe said: “My new role as a host for Crafters’ TV is very exciting. I have known Sara and the team for a number of years and have admired their passion and support of the wider craft community.

“I’ve also had the opportunity to work with Crafter’s Companion’s brilliant team on a regular basis.

“I’m really looking forward to getting to know the customers on a larger scale, whether that’s interacting online, meeting them in stores or at the company’s crafting retreat, Craftaganza.

“I am always keen to learn new skills and techniques and I’m not ashamed to say that sometimes I will be learning alongside the viewer!”

Sara Davies MBE, founder and creative director of Crafter’s Companion said: “Crafter’s TV has become a really exciting venture for the business. We have created this platform solely to excite, entertain and educate our customers.

“It’s a place where they can preview our upcoming launches, find inspiration or take advantage of one of our great offers and we soon realised that having a presenter would take Crafter’s TV to the next level.

“When the opportunity presented itself, we knew that Joe was a perfect fit. I have known Joe for years, he has a fantastic personality and will do a tremendous job of driving engagement so we are thrilled to have him on board.”

Crater’s Tv is available on: