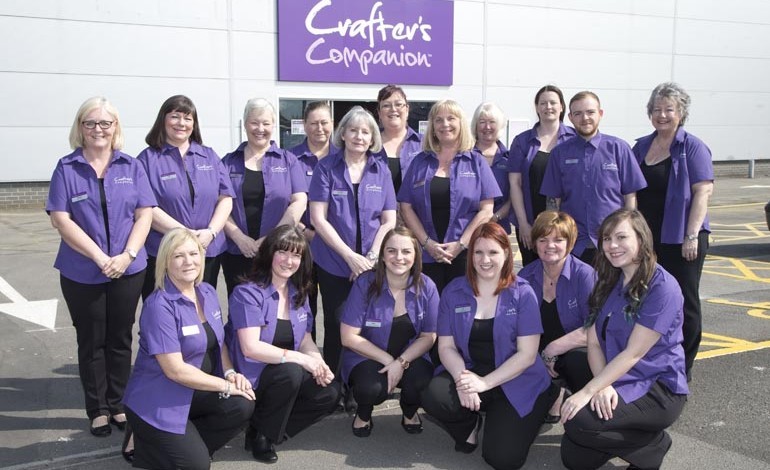 Leading craft supplier, Crafter’s Companion has added 33 new recruits to its team in the run up to the opening of its first UK store in Newton Aycliffe.

The new store, on Aycliffe Business Park, will officially open to the public on Saturday (28th May) and is intended to be a destination not only for avid crafters but also those who want to try crafting for the first time.

As part of the store launch, the company planned to recruit 16 new team members to run the retail operations at the County Durham outlet.

However, following a recruitment day held ahead of the launch, the company has decided to take on a further nine new recruits to staff the store.

Founder Sara Davies said: “We were absolutely overwhelmed by the interest in the new positions. This is our first UK store and we were really keen to find the right people for the job.

“There were so many talented crafters that turned up to the recruitment day, it was absolutely impossible to only employ 16.

“We’ve chosen some really amazing people to be at the heart of our new store and we’re sure they’ll all make great additions to the Crafter’s family.”

Along with a coffee shop and themed shopping areas, which will give visitors the chance to interact with the brand and its products, the new store will also have dedicated areas for demonstrations and workshops, which will be led by its talented team.

“We’re so excited for the launch day and we can’t wait for our customers to see everything that the store has to offer.”

The recruitment drive follows the company’s move to new corporate headquarters in Newton Aycliffe, which saw an additional 12 team members added to the team.

Crafter’s Companion, which was founded by Sara Davies in 2005, specialises in manufacturing and distributing crafting tools and products, which are currently sold online via its website, on TV shopping channels across the world and by independent retailers.