Aycliffe’s first XI romped to a 108-run win against Billingham Synthonia’s second XI on Teesside, while our second XI claimed their first victory of the season at home to Maltby’s third XI.

On Saturday, Aycliffe were 197 all out from 45.4 overs, with 18-year-old batsman Sam Telford carrying his bat to top score with a superb unbeaten 72, his career best innings.

Chris Palmer scored his second half century of the season with his innings of 58.

It took Aycliffe just 30 overs to do away with Synners, notching just 89, with fast bowler Sean Morgan bowling brilliantly to take a season’s best 5 for 31 from 12 overs.

He dismissed the top five Billingham batsmen to break the back of the home side’s innings.

Telford was named man-of-the-match after opening the batting and remaining unbeaten.

“It was a fantastic innings from the youngster who batted with maturity beyond his years,” said the club’s secretary Lee Weldon.

It was Aycliffe’s fourth win of the season, placing them seventh in the NYSD League third division with 104 points.

Saturday’s resounding win was followed up by another victory for Aycliffe’s second team against Maltby at Aycliffe Sports Club on Sunday.

Aycliffe racked up 189 from 44.2 overs, with Kyle Robinson (pictured above) scoring the second team’s first half century in the NYSD with an innings of 53.

Maltby’s third XI were all out for 126 from 31.2 overs, with 18-year-old fast bowler Dan Weldon (pictured below) taking the second team’s first-ever five-wicket haul in the NYSD when he finished the match with career best figures of 5 for 24 after 8.2 overs.

Tom Wickins also chipped in with 3 for 31 as Aycliffe’s seconds won their first game in the NYSD.

Lee Weldon said: “It was a fantastic performance from our young team, especially after last week’s heavy defeat at Blackhall, and that capped off a great weekend’s cricket for the club, fantastic weather and brilliant victories for both senior teams.”

There’s no game for Aycliffe’s first team this week, but the second team go to Stokesley this Sunday to take on their third XI (2.15pm). 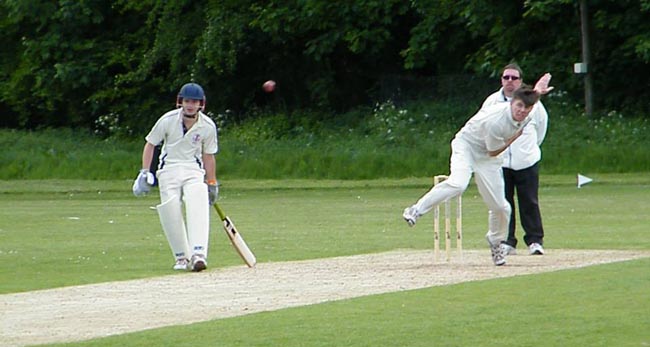