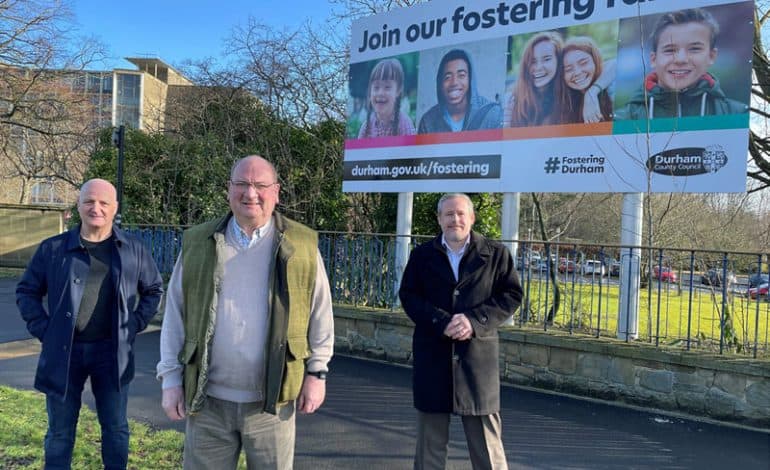 The Joint Administration of Durham County Council (DCC) has repurposed a huge billboard at Aykley Heads to boost a campaign to help children.

One of two that were erected several years ago, the billboard had been carrying an old and inaccurate advertisement.

It now urges the public to consider getting involved in the council’s fostering and adoption programme.

The billboard is located outside County Hall on the way into Durham and will be seen by thousands of residents every day.

Late last year, as part of ongoing work to boost its fostering and adoption programme, DCC launched an appeal to find carers for children with additional needs and disabilities.

The council currently has over 250 families caring for children and young people, but more are needed, particularly to support those youngsters who require additional support.

The advertisement on the billboard encourages people to get involved in fostering.

Councillor Ted Henderson, DCC’s portfolio holder for children and young people’s services, said: “The adverts on these prominent billboards were out of date and made inaccurate statements, so instead we are putting one of them to good use.

“We have some amazing children being looked after who need a home.

“I would urge anyone who feels they could help a child to get in touch about our fostering and adoption services.”

He said: “I’m delighted that we have taken action so that this billboard serves a positive purpose.

“The fact that the Joint Administration has decided to remove a statement that was simply wrong and replace it with a message to support such an important campaign, is testament to how we are now working together for everyone in County Durham.”

Work is in the pipeline to update the advertisement displayed on the second billboard, in order to correct any inaccuracies and promote the message that Durham is ambitious and open for business.