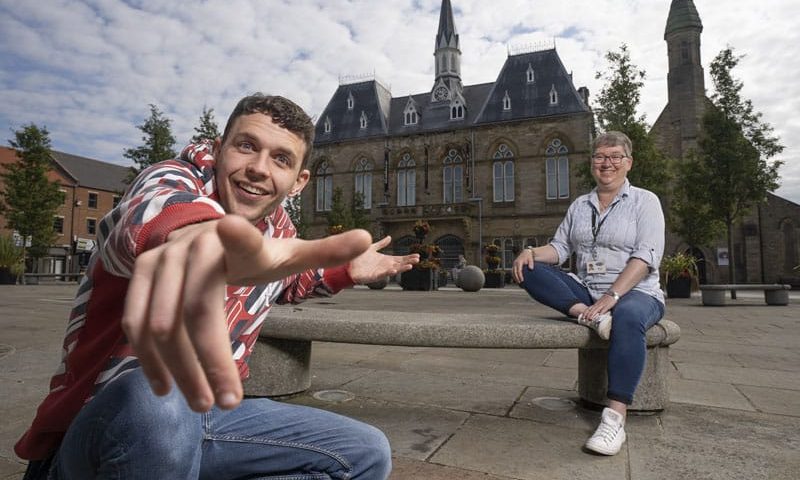 A North-East theatre maker who has been treading the boards since he was 10 years old has added his voice to County Durham’s bid to become UK City of Culture 2025.

Originally from Crook, Jake Jarratt discovered his passion for performing arts at a young age and seized every chance to nurture his talent and pursue his dream of becoming a professional actor.

After studying drama at both GCSE and A level at King James I Academy in Bishop Auckland, Jake went on to complete a degree in drama and applied theatre at Northumbria University. This was followed by a Masters in theatre and performance.

In 2018, he debuted his first solo show, Blokes, Fellas and Geezers, at Bishop Auckland Town Hall – the same venue where he took his first tentative steps onto the stage 14 years earlier.

The 27-year-old, who lives in Bowburn, now divides his time between acting, directing and script writing for theatre companies across the UK, as well as delivering drama workshops on behalf of Durham County Council’s community arts team.

Jake is fully behind County Durham’s UK City of Culture bid, as he believes the increased opportunities this would create could be life changing for many children and young people.

“What really appeals to me is that this is a bid for the whole of County Durham,” said Jake.

“Durham City is amazing but that is just one part of the county and there is a lot more going on here that we need to tell people about.

“This is a chance to showcase the talent and potential that exists in communities across the county and to build on what is already going on to create even more opportunities.

“Not everybody likes acting, just as not everyone likes painting or going to the theatre. If we can grow County Durham’s reputation as a cultural destination, we can encourage more arts organisations to come here and offer new and exciting things.

“For me, this is all about the people of County Durham.”

The bid is special as it aims to secure the title for Durham – both the county and the city – and follows the announcement that groups of towns can submit joint bids for the first time.

Those involved in the bidding process believe that success would significantly boost visitor numbers to the county and wider region, along with increased investment and new economic and employment opportunities.

For Jake, who has worked with the council’s community arts team for many years, it is also a chance to build on grassroots arts projects.

He said: “There is some really good work going on, but I think there is always more that can be done. This is our chance to reach out to people we haven’t connected with before.”

Debbie Connell, Durham County Council’s community cultural development co-ordinator (south and west), said: “I’ve known Jake since he was 10 years old and I have watched him grow as a person and as an artist and theatre maker over the last 16 years.

“For him to share his skills, knowledge and talent in his home county, while juggling a professional theatre career around the UK, is such an inspiration.

“There is a wealth of homegrown talent here in County Durham, and through our own community arts engagement programme and the projects we help to develop and support, we can support other young people like Jake to follow their dreams.

“As UK City of Culture, we could shine a national spotlight on the talent that exists in our communities and so I would encourage everyone to please back the bid.”

With all expressions of interest now in, the Department for Digital, Culture, Media and Sport will shortlist six locations in September. The successful applicants will then have until January 2022 to submit their full bids, with the winning city then announced in May 2022.

To help spread the word, members of the public are encouraged to share why they believe County Durham should win on social media using the hashtag #durham2025.