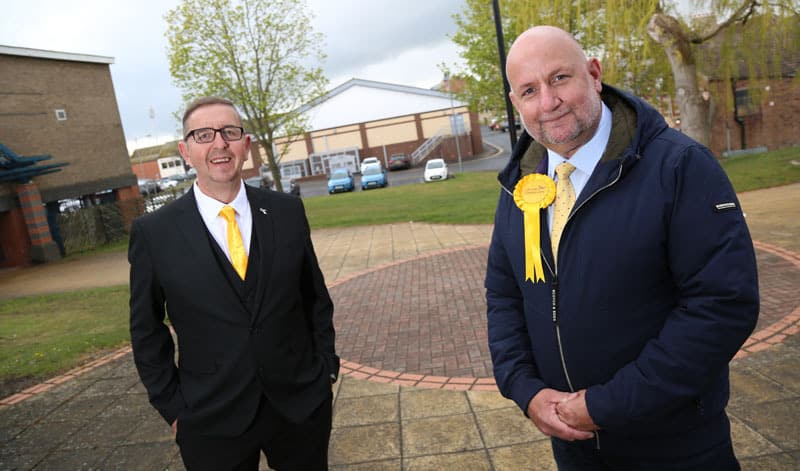 The new leader of Durham County Council will be a Liberal Democrat with a Tory as deputy leader if plans for a new joint administration go ahead, it has been reported.

Amanda Hopgood is reportedly the first choice to lead the new administration and would be the first female leader in the council’s 132-year history.

Cllr Hopgood, leader of county’s Lib Dems, could take charge tomorrow, with Richard Bell, leader of the Conservative group, as her deputy.

The alliance is made up of Tories, Lib Dems and three independent groups including the Spennymoor Independents, the Durham Group and Durham County Council Independent Group

The proposals are set to go before the council’s AGM on Wednesday.

Aycliffe Lib Dem candidates Michael Stead (above, right) and Nev Jones stormed to victory in the local elections held on May 6.

Cllr Stead told Aycliffe Today: “People in County Durham from across the political spectrum voted for a new approach, and that is what we intend to deliver.

“Our discussions are underpinned by a refreshing attitude of positive, constructive cooperation and we are excited about the potential of what we can achieve together.

“As soon as we are ready to share more details, we will issue a full statement.”

A spokesman for the alliance said: “We recognise that, subject to a successful annual meeting, this will be a historic moment for Durham County Council.

“Not only will the council be run by a non-Labour administration for the first time, it will also have its first ever female Leader.

“In building to this moment, the partners have demonstrated what can be achieved by focusing on the big picture and the best outcome for communities across the county.

“In that spirit, we are willing to work with any and all groups for the good of County Durham.”

It is understood most of the 73 non-Labour members have indicated support for the move but nothing will be certain until the council’s annual meeting on Wednesday morning at Spennymoor Leisure Centre.

Cllr Simon Henig, who represents Chester-le-Street, announced he would not continue as leader and was standing down as leader of the County Durham Labour group and after the part lost its majority for the first time in a century.

He has been replaced by Stanley councillor Carl Marshall who hopes to form his own administration at the council.

He said the new alliance could harm progress on existing projects and has complained that Labour had been excluded from talks.

Cllr Carl Marshall said: “Labour’s first and only priority at this moment in time is to play our part in creating a council that delivers for the people and businesses of County Durham.

“To be excluded from talks between other political groups is not only disappointing, it threatens to destabilise the significant progress we have made in laying the groundwork for 30,000 new jobs across Durham.

“Labour heard what people had to say in the May elections.

“It was a painful lesson, but one we accept and learn from.

“People want change, they voted for a different make-up of Durham County Council, but they also voted for Labour to remain the largest party in the county, so to be completely excluded from these talks by this coalition of political parties, whose only uniting factor seems to be an anti-Labour platform, seems to go against the will of the people.”

“Labour has offered the hand of friendship to other parties, only to have it slapped away.

“However, that hand remains extended and we urge our fellow councillors to accept it if we are to truly deliver the council that the people of Durham voted for.”