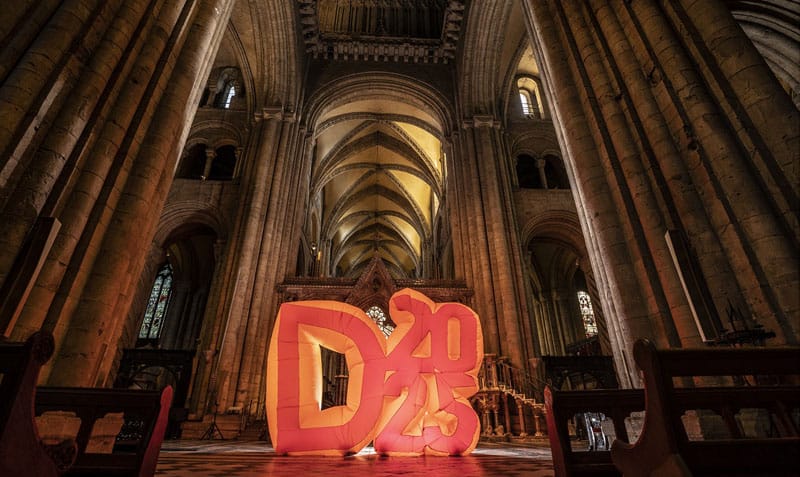 Being named UK City of Culture 2025 will attract millions of visitors to County Durham and the North-East, create thousands of jobs, and significantly support the region’s levelling up.

Durham County Council has outlined its plans for the Durham 2025 campaign, submitting its bid for the next stage of the competition with principal partner Durham University on behalf of Culture Durham – a partnership of organisations united by their belief in the power of culture to transform lives.

Uniquely, the bid aims to secure the title for Durham – both the county and the city – and if successful, it would be the first ever county bid to achieve UK City of Culture status.

A rich and vibrant cultural scene is a key factor in the council’s inclusive approach to the economy.

This week the authority has asked more than half a million residents to join its big econ-versation on issues which matter to them most, helping to create a new and ambitious economic strategy for the future that provides opportunities for everyone.

In order to celebrate the submission of the bid, award winning County Durham artist, Steve Messam, has created a giant Durham 2025 inflatable artwork which is being displayed at a number of different locations across the county.

The bid aims to bring people and communities together, centring around themes that will help people to congregate, and illuminate and energise the county.

It builds on Durham’s track record for major events such as Lumiere, the UK’s leading light festival, whilst also creating new opportunities to meet the county’s aspirations for levelling up.

Hundreds of residents have been involved in the bid’s development, contributing a range of ideas, from the quirky to more serious, with many of those ideas featured in today’s submission and highlighting the collaborative nature of Durham 2025.

The bid also demonstrates the significant, sustained impact that the accolade could have on the region’s economy: it will help to create an additional 2,500 jobs in Durham’s creative industries and an additional 200 creative enterprises in the county by 2029; almost 1,000 businesses and organisations will be directly supported by the title; and, it will create a £41.5m spend with at least 50 per cent of contracts going to local suppliers.

It would also attract more than 15 million visitors to the region, many of whom would stay overnight, helping to bring an additional visitor spend of £700m and supporting the creation a further 1,800 jobs in the tourism sector.

At the heart of the bid is a year-long programme of arts, culture, sport, science and economics, including spectacular opening and closing events, a 12-month celebration of Durham’s 1,300-year history of space science, an international celebration of the bicentenary of the railways and a travelling fair that asks big questions about the local economy.

Cllr Amanda Hopgood, leader of Durham County Council, said: “It’s fantastic to be able to finally share our exciting plans for Durham 2025. County Durham has such a huge potential, and we are determined to bring together our extraordinary people, places and ideas to help transform not just the county, but the whole of the north east.

“This is a bid on behalf of the whole county. We want everyone who lives and works in County Durham to be a part of our journey and to reap the benefits of a successful bid.

“Our plans will involve every person, town and village in County Durham.

“Whatever your age or background, there will be a whole host of events and opportunities for you to get involved in during Durham 2025 so please do continue to get behind the bid.”

“Not only does it help to bring people together, but it also raises aspirations and helps to create long-lasting opportunities for communities to get involved with cultural activities.”

County Durham is one of eight locations to have already made the longlist for UK city of Culture 2025, with a shortlist expected to be announced next month. It is understood the overall winner will be declared in May.

The winning location will then take on the baton from Coventry, UK City of Culture 2021, which has so far attracted more than £100m in capital investment to support cultural projects.