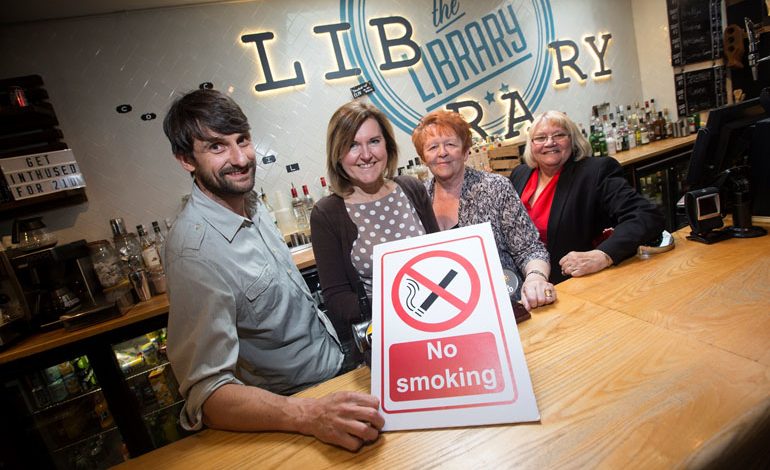 Ten years on from the introduction of England’s ‘smoke-free’ law, which banned smoking in enclosed areas and workplaces, local businesses and clubs are celebrating the successes of the smoking ban.

Andy Nicholson, general manager of The Library bar in Saddler Street, Durham, has worked in the pub trade for 29 years, but quit smoking in 2003 after his son was born and says he could never imagine going back to the days of smoky pubs.

Andy said: “The smoke-free law has been the best thing to happen to the trade and I don’t imagine many people would go back to the days when people smoked.

“The silent majority completely support this.

“Pubs have evolved – they were once places which didn’t serve food, allow women or show live sport.

“It’s also allowed us to become more family friendly places during the day which for most has been great for business.”

On Saturday 1 July 2017, the very same day that marks a decade of anti-smoking legislation, Bishop Auckland St. Mary’s Junior Football Club will become the first youth football club in County Durham to officially ask all spectators and club officials not to smoke or vape while attending their games.

The club committee took the decision to go smoke free earlier in the year to help protect the health of their young people.

“Our young people are athletes and we want to give them the best experience and start at football as we possibly can.

“Not allowing our young people to be exposed to smoking while they play football is one of the things we can do.”

Cllr Audrey Laing, Chair of the County Durham Tobacco Alliance said: “We know that children are influenced by what they see, and young people are most at risk of becoming smokers themselves if they grow up exposed to smoking behaviours.

“It is great that Bishop Auckland St. Mary’s Junior Football Club has taken this step.

“It seems bizarre now to think back to the days when smoking was allowed indoors in the work place and public places.

“The work of our tobacco alliance partners hasn’t stopped since the smoke-free law came into force.

“The law has been a great landmark amongst many actions to reduce the impact smoking has on our communities, and we have seen a reduction of over 16,500 smokers in County Durham over the last five years.

“Smoking is still our biggest killer, too many of our local residents will die so young from avoidable smoking related causes.

“For this reason we remain focussed in our efforts to reduce the number of smokers in County Durham by 5%.”