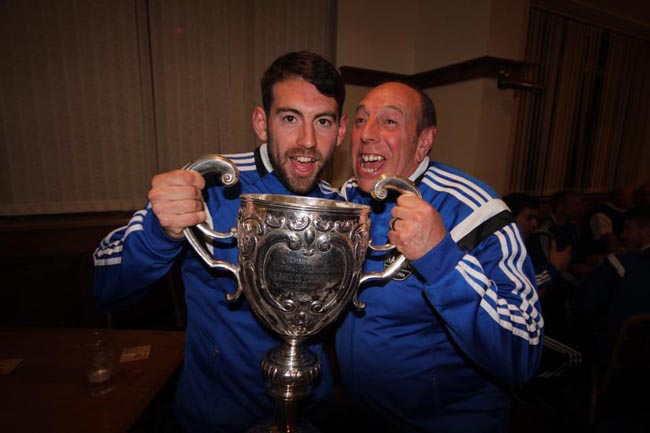 The midfielder was a key part in Aycliffe’s rise to the Northern League first division in recent years.

But he says Thursday night’s victory over Stockton Hardwick Social beats that.

Warren Byrne scored twice for the Big Club before Hardwick pulled one back late on.

The final whistle signalled delirium among the Revolution faithful as fans poured onto the Eppleton Colliery Welfare pitch.

“It was unbelievable,” said ‘Rat Boy’ Owen, pictured (above) with his dad, Dave, who jointly manages the Big Club side with Blackburn Rovers goalkeeper Jason Steele.

“When that final whistle went, it was the best feeling in the world – something you can keep for the rest of your life.

“There was people running in all directions. Supporters on the pitch, committee lads celebrating. It was just special.”

It’s the first time the Big Club has won the County Cup since Allan Oliver’s side won it back in 1998.

Owen added: “Winning silverware with Aycliffe was brilliant, I have some great memories of my time with the club, but this is with your mates.

“We all drink together and we beat some good sides along the way, but went into the final as under dogs.

“It was a tense game and we didn’t play our best football if we’re honest, but the defence and Stevie Rich in goal were awesome all night, they were first class.

“It was a great team effort all-round and one of the best nights of my life.”