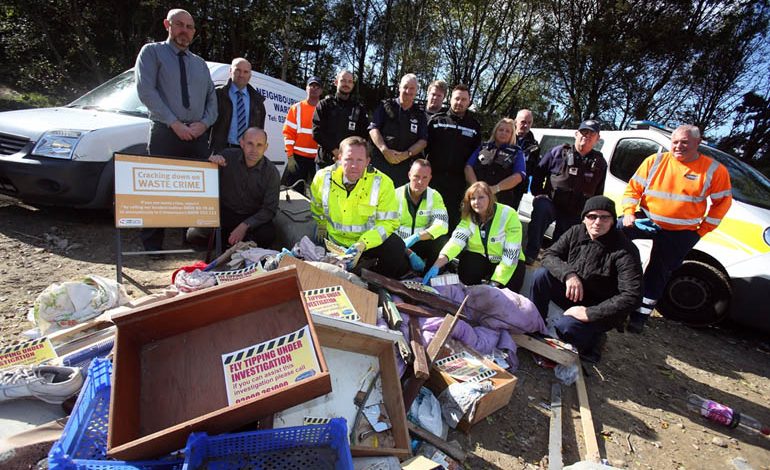 The council landed the coveted Local Authority of the Year honour at the Keep Britain Tidy Awards, while its anti-fly-tipping programme Operation Stop It scooped Environmental Campaign of the Year.

The awards, staged in Leeds on Thursday night, celebrate the achievements of local authorities, businesses and land managers in improving the quality of public spaces through campaigns, innovations and partnerships.

The local authority of the year prize was in recognition of the council’s commitment to improving and protecting the environment often involving the local community, from its new wildflower verges, to recycling promotion and support for numerous ‘in bloom’ groups around the county.

Alongside this, the council was also commended for the innovative ways it tackles the minority who spoil the environment, such as widespread use of CCTV in hotspot areas.

Operation Stop It won the campaign accolade having led to a 22 per cent reduction in flytipping across the county and saved more than £104,000 in clean-up and disposal costs.

“We take our responsibility as guardian of our beautiful county very seriously and it is gratifying to receive national recognition for our efforts.”

Cllr Simon Henig, Leader of the council, added: “We know the standard of entries for these awards is always very high.

“This makes it all the more pleasing to win these awards from such a respected national charity and we’d like to thank our communities who work very closely with us to protect and enhance the environment.”

Flytipping has fallen by more 22 per cent since Operation Stop It began, with this equivalent to 3,494 fewer incidents.

The campaign sees CCTV cameras deployed across the county playing a key part in catching flytippers.

Oliver Sherratt, the council’s head of Direct Services, said: “We all have a responsibility for the local environment and these two accolades help demonstrate what can happen when councils, communities and other partners work effectively together.

“We know how much our residents deplore flytipping and we work very closely with both they and our partners to ‘stop it’ as much as we can.

“The campaign has led to a major reduction in this environmental blight and everyone involved in winning this award can be rightly proud of themselves.”

In addition to Operation Stop It, various other projects and campaigns helped the council pick up the local authority of the year title.

The Big Spring Clean, in which the council supports residents and volunteers to carry out their own litter picks, last year saw 145 rubbish collections with 1,692 bags gathered.

The council also delivers It’s Your Neighbourhood, a scheme which provides funding for small voluntary led groups wanting to improve their local environment.

The Green Move Out scheme also sees the council working with Durham University to encourage students to donate their unwanted items for reuse to a local charity, in order to help prevent good quality household items ending up as waste.

Keep Britain Tidy Chief Executive Allison Ogden-Newton said: “The work that Durham County Council and other local authorities do to improve our environment is superb.

“I would like to congratulate Durham for its creativity, innovation and commitment to delivering quality services for its residents.”