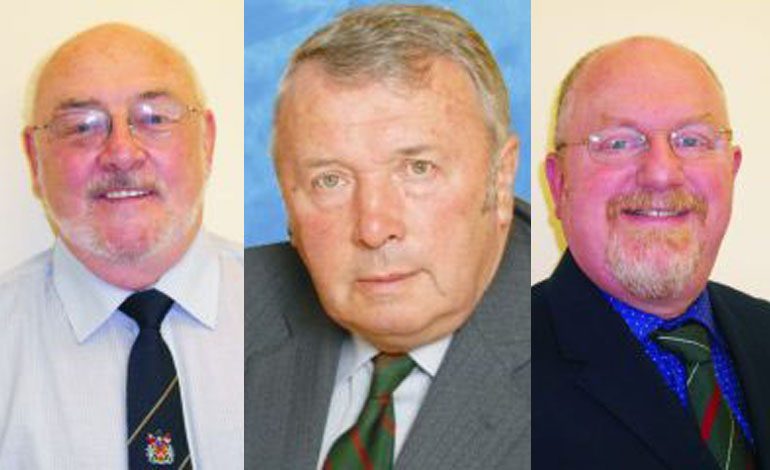 A councillor is considering a possible no confidence motion against three senior councillors after the council leader blocked an inquiry into the Santa Tours debacle.

Arun Chandran says he’s “mulling over” the possibility of the motion against council leader Bob Fleming (above, centre), deputy leader Malcolm Iveson (above, left) and Jed Hillary (above, right), who’s chairman of the Recreation Committee.

All three knew about the health and safety issues in January, but chose to do nothing about it.

Aycliffe Today also understands Cllr Fleming, who controls the Aycliffe Labour Group with an iron fist, blocked a request from a fellow Labour councillor for an inquiry to be held into why Great Aycliffe Town Council was made a national laughing stock over the Santa Tours fiasco.

Cllr Fleming falsely told councillors that senior GATC employees would be temporarily suspended during any inquiry, to put them off going through with it.

But Aycliffe Today understands there’s no reason why any member of staff would be suspended, unless there’s any suggestion of misconduct or illegality.

Now, independent councillor Chandran says the Labour group must “get to grips” with the situation after their inability to deal with the health and safety issues around Santa led to an embarrassing PR disaster.

Chandran told Aycliffe Today: “The leader and deputy leader of the Labour Group, and the chairman of Recreation, stated “This Minute 88 of the Recreation Committee on January 17 2018 makes it the responsibility of the Leisure Manager and Town Clerk. Following the Full Council on January 31, which ratified the minute, the ultimate responsibility became the Town Clerk’s, responsible for the staff under him.

“Nothing was mentioned about the Santa Tours at Recreation Committee on March 7, nor April 11, nor May 16, nor July 18, nor September 5.

“And at meetings of the Events Sub Committee nothing was mentioned about Santa Tours on May 22, nor July 4, nor August 22.

“No Special Recreation meeting was called. No report from the officers about the information was gathered.

“Why was nothing said or reported for nine months by officers on this sought-after information?

“It is perfectly reasonable and safe to conclude that all councillors (excluding the leader, deputy leader and chairman of Recreation) will have assumed, that as no further mention was made of this issue until October 3, that in fact it was indeed no longer an issue of any concern, otherwise the officers would surely have mentioned it prior to October 3, if it was still an issue of importance or relevance.

“It is the officers, not councillors, who would make any relevant enquiries and report back. Had the officers done their job following the January 17 meeting, then the actions culminating in the letter of the Chief Constable, dated October 18, would have come to the fore much earlier in the year, and the council would have had plenty of time to resolve the issue of volunteers and vehicles then.

“Indeed, Cllr Fleming stated at the Recreation meeting on September 17, in his publicly read out statement, that the Santa Tours was usually looked at only at September time. Normally this would appear true, but it fatally ignores the existence of legally-passed and binding Minute 88 of the Recreation Committee, of January 17, 2018.

“He also stated at the meeting, which I recorded, that he had dealt with it within two weeks of it coming to a head on social and national media.

“Perhaps he could have dealt with it in two weeks in January or February, instead of when it hit the fan in October?

“The Labour leader has an office of his own next to the Town Clerk (by what authority I do not know) where he regularly breathes over the shoulder of the Town Clerk and officers.

“If he did not know he is incompetent. If he did know he is complicit. The Labour Group needs to get a grip on this fast.”

Aycliffe Today has tried contacting Cllr Fleming twice in the last three days to offer him the opportunity to comment, which he has declined.