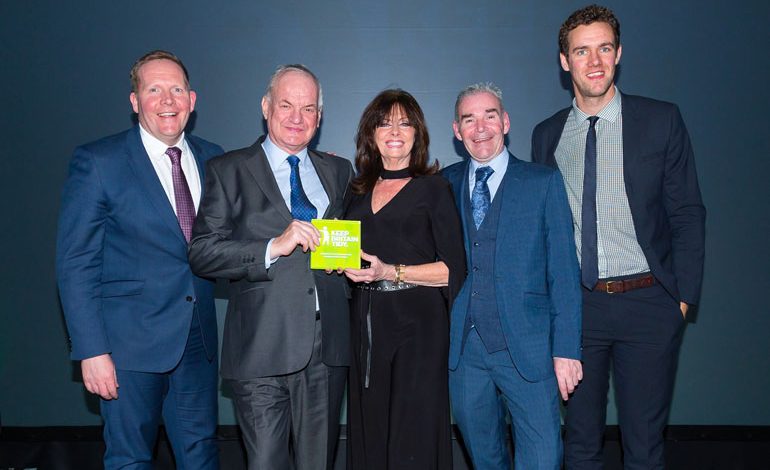 Durham County Council has clinched a prestigious national ‘green’ award for the second year in a row – thanks to Operation Spruce Up.

The council has taken home the title of ‘campaign of the year’ at environmental charity Keep Britain Tidy’s Network Awards 2018 for Spruce Up, its programme to ‘clean up and ‘green up’ the county’s town and villages.

The council was a shortlisted finalist in two other categories – community engagement, for its civic pride work, and litter hero, for Bob Sorley, a volunteer with walking and cycling charity Sustrans for 15 years.

The authority holds onto the title it won at the annual awards last year for its anti-fly-tipping campaign Operation Stop It.

Spruce Up was launched in November 2016 to bring teams from across the council’s different service areas together in one town or village centre, to give it a thorough clean.

The programme has visited a new location each month with the teams assisted by partners including town and parish councils, the council’s area action partnerships, residents groups and local schools and businesses.

A survey conducted in communities visited by Spruce Up has shown that 90 per cent of those asked noticed an improvement as a result of the work done.

Cllr Simon Henig, leader of the council, said: “We are immensely proud of the work we have done with partners in our towns and villages through Operation Spruce Up and delighted that Keep Britain Tidy has deemed it the best campaign of the year across the country.

“Winning this particular award for the second year in a row is proof that the campaigns we undertake for the benefit of our environment, communities and residents really are making a difference.

“It is also very positive that our civic pride work and Bob reached the finals on a national stage.”

The civic pride work which saw the council shortlisted included co-ordinating In Bloom campaigns across the county, the Big Spring Clean, wildflower planting, its Green Move Out scheme which encourages students to recycle as well as the authority’s #BeLikeChip responsible dog ownership scheme.

Retired Mr Sorley, 69, from Burnopfield, was nominated by the council in recognition of the 580 hours he spends each year picking up litter along the Coast to Coast cycle route.

He said: “I believe it’s worth giving up my time to ensure that this important route looks as good as it possibly can for the benefit of local people and to make visitors want to come back and use it again and again.

“It’s nice that the council recognised what I do by putting me forward for an award and to be shortlisted at national level is just amazing.”

Keep Britain Tidy’s chief executive Allison Ogden-Newton said: “Congratulations to the team at Durham County Council, winning our campaign of the year award for their ‘Operation Spruce Up’, working together to improve local spaces across the county. They are a fantastic example of just what is possible when people have the passion and commitment to make a difference to the environment on our doorstep.

“The fact that Durham County Council were shortlisted for two more of our awards this year shows how much they are achieving in the fight to end litter and improve local places for people. Thank you to everyone involved for all your incredible work.”

Spruce Up is going for double national success next month having reached the finals of the Local Government Chronicle Awards, in the environmental services category.

It is shortlisted alongside the council’s £20m Finance Durham fund which supports local businesses, and helps firms from outside the county to move here.